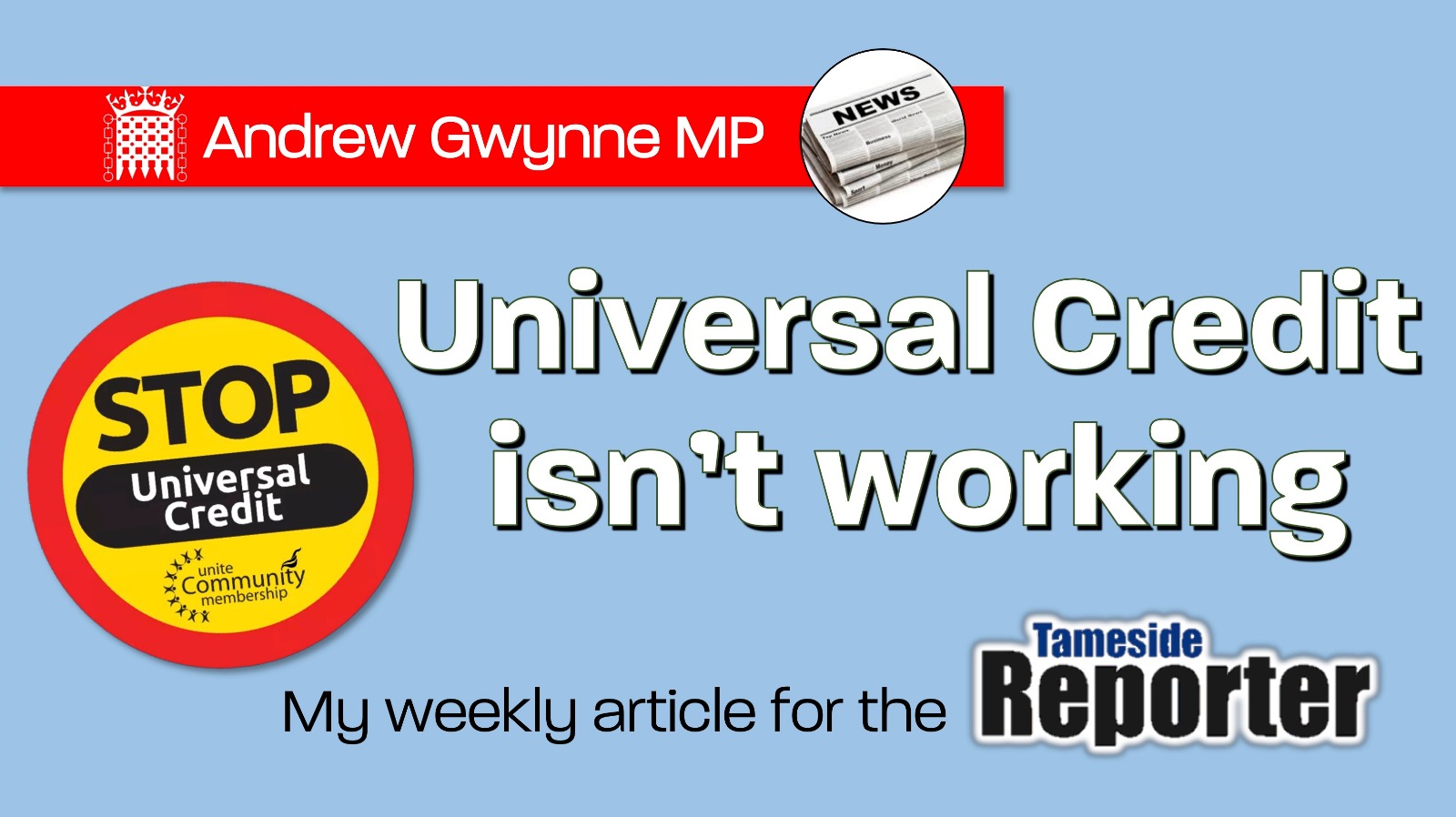 As a constituency MP representing a big part of Tameside I know full well of the dire consequences on people’s lives that this botched Universal Credit (UC) rollout has caused.

As one of the first local authority areas in England to fully implement UC, Tameside is in a very unique position to assess its impact and whether it is meeting its objectives. Since 2014 I have been helping constituents deal with the unfairness of the system as well as the many unreasonable demands which UC places on people and working families.

Let me be crystal clear with people as this has been an ongoing sore for our community for five years now, the Universal Credit system is flawed and the impact on the rushed rollout has been harmful to people’s lives.

Initially designed to ‘simplify’ the social security system, the Government’s Universal Credit is a means-tested benefit, which replaces six forms of both out-of and in-work support, for working-age households. There have been problems from the start with a recent scathing report from the National Audit Office (NAO) revealing that around one in four new claims were not paid in full, or on time, or faced late payments delayed by an average of four weeks.

As a result, this Tory Government’s flagship welfare reform programme has put claimants in rent arrears; it’s meant people have been unable to afford their gas or electricity bill; and as many of you would have seen in the news, it has forced families to go to a food bank for the first time in their lives. Facts are facts, foodbank referrals have risen 52 per cent in areas where Universal Credit has been rolled out over the previous 12 months, strongly suggesting that instead of lifting people out of poverty it is pushing them into it. These findings don’t come from a newspaper or political party, but the Trussel Trust, the UK’s leading charity on ending food poverty.

As an MP for a Universal Credit roll-out area, I have seen how these failings are affecting my constituents, who have essentially been used as guinea pigs for an ill-conceived policy. I’ve had constituents visit me and my staff to share a very similar tale; sadly this is a major issue for the well-being of Tameside residents who are suffering at the hands of a system that is not fit for purpose.

The stress and anxiety caused by delays and reductions in benefits, more often than not benefits related to families with one or more adults in work, can have a real impact on mental health as people struggle to keep their heads above water.

The level of suffering within our community is shameful, and while I am doing everything I can as an MP to assist them through hardship, it is important to remember the source of such pain can be traced back to this Government’s policies.

Ministers must stop and listen to the people who are going to be hit by these changes, and they have to do it now. Failure to do so risks human catastrophe.