A force for good – my weekly article for the Tameside Reporter 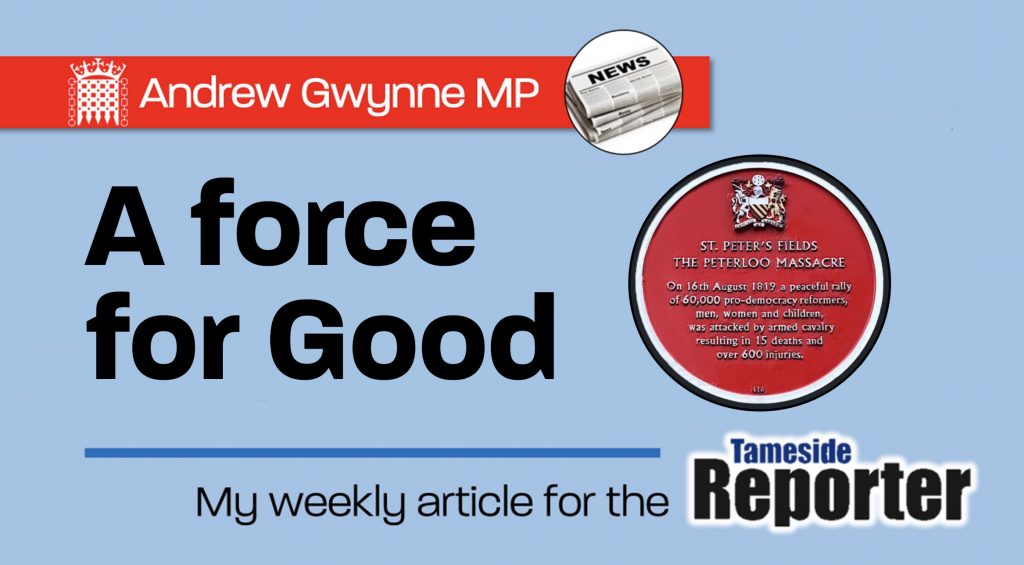 “What’s the point of politics?” – In this age of (sometimes justifiable) scepticism and cynicism, it’s a question I hear sadly all too frequently.

Politics, if done for the right reasons, can be transformative. It’s about how we care for one another, and what type of society we want to live in.

For me, it should be about narrowing inequality, tackling injustice and offering opportunity. These things brought me into politics and they are still what keeps me battling. You see, life does not have to be the way it is. Our society can be fairer and more socially just.

Last weekend, I attended the Tameside Local History Forum’s “Peterloo 200” exhibition in Denton. The bicentennial anniversary of that famous open air meeting at St. Peter’s Field in Manchester, which ended in bloodshed and carnage, isn’t just a reminder of democratic battles of the past, but of everything that flowed from it.

From those demands for parliamentary representation came demands for workers’ rights and the creation of the trade union movement. In turn, the trade unions created a Labour Party to give working people a voice in Parliament. Demands for universal suffrage followed that radical tradition. The fight for social justice flowed from all this: education, health services, public health improvements, our welfare state, homes for heroes.

Today we take many of these advances for granted; there’s no reason why we shouldn’t. But injustice and unfairness still exists. The gap between the richest and the poorest is far too wide. While our public services are starved of funding, tax-giveaways are given to the big corporations (those that don’t avoid paying their share in the first place). Health inequalities are widening again for the first time in a generation. We have a housing crisis. Workers’ rights are under attack.

Politics is still very relevant. And as a force for good it is as relevant today as it was in 1819 at the time of Peterloo, or in 1945 as we rebuilt our country after the Second World War.