We are facing a climate emergency – my article for Denton Correspondent 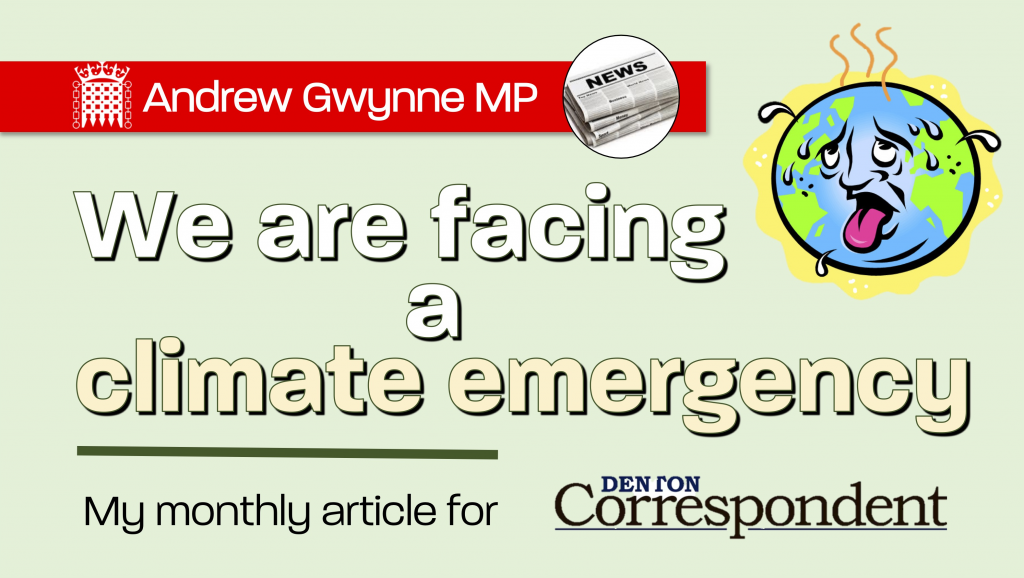 This week the UK parliament passed Labour’s motion and has become the first in the world to declare an environment and climate emergency. This has set off a wave of action from parliaments and governments around the globe and towns and cities across the country, as they followed us in pledging urgent action on climate change.

The term ‘Climate Emergency’ is an internationally recognised declaration being used around the world to publicly declare concern over recent Intergovernmental Panel on Climate Change (IPCC) findings. These findings describe the enormous harm that a 2°C rise in global temperatures would cause and the need for immediate action from Government.

Action doesn’t have to be just at the national and international level. We can do our bit locally too – from planting trees to using our cars less. The sizeable investment in the Greater Manchester ‘Bee Network’ of cycling and walking improvements through Denton is one good example, and I’d also like to see a new community woodland planted on the old Ruby Street tip site, not only rejuvenating that dead piece of land for nature, but also linking it into the Tame Valley.

Despite local leaders stepping up to the challenge and increasing warnings from the scientific community that time is running out – this Government has continued to delay and shirk responsibility.

Last week, it was revealed that the UK will miss almost all its 2020 nature targets, with 14 out of 19 Aichi biodiversity targets currently not being met by the government. Austerity has had a serious impact on our natural world, with vital agencies such as Natural England having their budgets slashed in half. If we are to seriously consider any realistic chance of keeping global temperatures below the limit of 1.5 or 2 degrees and sea levels from rising, we need radical action from the Government and political leadership to change our laws, taxation and infrastructure.

This is no doubt the greatest challenge that we will face in our lifetimes – and the window of opportunity to avoid disaster is closing. The UK, along with the rest of the world is facing a serious environmental and climate crisis – but this government has stuck its head so far in the sand that even children are taking to the streets to protest.