GIVING BUS SERVICE CONTROL back to city and county regions 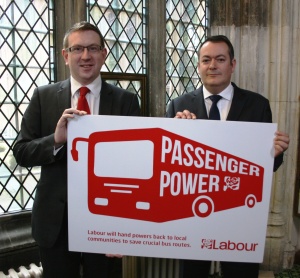 Labour is launching a new campaign– called ‘Passenger Power’ – about putting communities and passengers in control of local bus services. Labour will hand powers back to local communities in Greater Manchester to save crucial bus routes.

New government figures have revealed that local bus routes in the North West are being slashed on this Government’s watch, leaving people stranded. The new figures show that compared to 2010, there were 13 million fewer miles of local bus services in our region last year.

Across England, over 1,300 bus routes have been cut since 2010. At the same time, bus fares are rocketing, going up by 25 per cent since 2010 – an increase five times faster than wage growth. Over the same period, operating costs for local bus services has stayed the same.

The new figures reveal that bus passenger fare receipts from this year were half a billion pounds more than in 2010. And the operating revenue for the bus companies has increased by four per cent since 2010.

Bus companies have been cutting crucial routes that people rely at the same time as increasing fares to maximise their own profits. Like the energy companies, the bus market is broken.

Labour is setting out a new plan for local bus services to fix the problems. The next Labour Government will legislate to give greater control over local bus services to cities and county regions. Through the ability to determine routes, set fares and integrate bus services with other forms of public transport, local areas will be able to provide better services at one clearly understood price.

“Local bus services are the lifelines of our communities.

“Whilst the bus companies are coining it in, local bus routes are being slashed and this Government says everything is fine.

“The bus market is clearly broken and the way local services are provided is not fit for purpose. Labour will stand up for passengers by changing the way things work to hand all English city regions, including here in Greater Manchester, the London-style powers we need over our local bus services. This will ensure communities get the local bus services they need.”