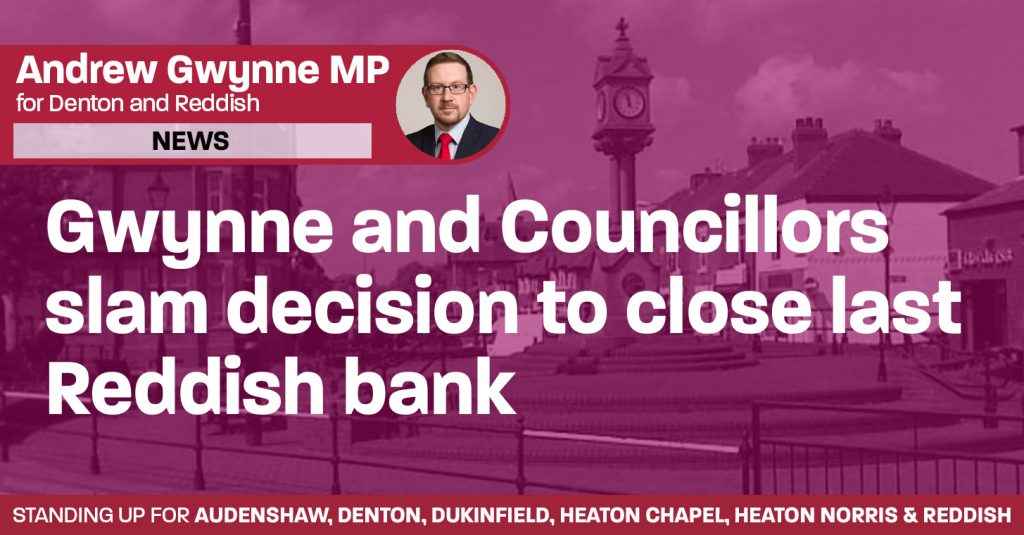 Andrew Gwynne, MP for Denton and Reddish, has joined with local councillors to express their disappointment in the news that the Lloyds branch in Reddish will close early next year.

The bank, on Houldsworth Square, was previously scheduled to close on 26 May 2020, but this was postponed by the pandemic. It is now slated to close on 22 March 2021.

This closure follows the closures of Natwest and Barclays branches in Reddish in 2015 and 2016 respectively, leaving Reddish without a bank.

Gwynne previously wrote to the Chief Executive of Lloyds Bank to oppose this closure, but it has proceeded nonetheless.

“It was good that the closure of the Lloyds branch in Reddish was postponed during the pandemic, and I had hoped that the bank had seen sense and reversed their decision.

“The long socially-distanced queues we’ve seen during the COVID crisis show just how important the bank is to the local community and it’s incredibly disappointing that this decision has been made, leaving the town without a bank.

“There is still time for Lloyds to reverse this damaging decision and I would strongly urge them to do so.”

“It’s very disappointing that Lloyds have chosen to go ahead with this closure.

“We saw during lockdown that this is still a much needed community asset as queues regularly spilled from the bank into Houldsworth Square.

“Closing this bank means the end of drop-in counter services in Reddish and it’s very regrettable.”

“The closure of Lloyds Bank is a blow to residents of Reddish and retailers, making life more difficult especially for the elderly and people without internet access.”