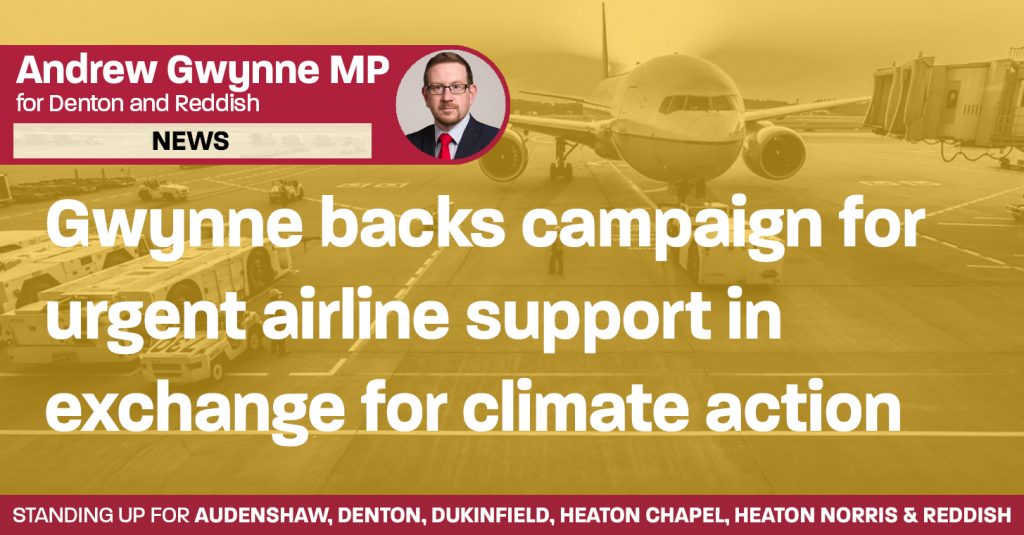 Andrew Gwynne, MP for Denton and Reddish, is backing a campaign which is calling for the Chancellor to provide an urgent economic package to UK airlines in exchange for their commitment to tackle climate change.

A letter has been sent by Sarah Olney MP to the Chancellor, signed by more than twenty cross-party MPs including Andrew Gwynne. In the letter, the fear is shared that future fares may rise without government support, whilst tens of thousands of people look set to faultlessly lose their jobs.

It is clear that airlines need public money to stay afloat during these difficult times. However, if public money is used to saved them, the airlines must be required by law to help tackle climate change, the letter says.

The letter also states the Government must provide economic packages with the condition that airlines pay no dividends to their owners, refund their customers for cancelled bookings and rehire their fired employees who they must then furlough.

The message is clear: people must come before profit.

“The Government must urgently act to save UK airlines by providing them with a package of economic support.

“However, economic support must only be given in exchange for climate action, saving both the planet and the jobs of the people who reside on it.

“It would be unacceptable to stand back and let tens of thousands of people faultlessly lose their jobs, and I hope that the Government work to ensure that this does not happen.”