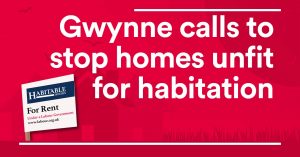 Denton and Reddish MP, Andrew Gwynne, is backing a Bill being introduced by Labour MP Karen Buck this Friday 19 January which will give renters a new legal right to ensure their home is ‘fit for human habitation’.

The new legislation, long campaigned for by Labour, could help renters in 162,000 dangerously unfit properties in the North West.

Nationally, there are over one million rented properties containing the most serious ‘category 1’ hazards, including homes that have unsafe electrics, vermin infestations, or aren’t fire safe.

The Labour bill will give tenants new legal powers to enforce their right to a decent home by taking their landlord to court if the property they live in is not fit. This is a particularly important for council tenants such as those who lived in Grenfell Tower, because it is councils who are notionally responsible for enforcing standards, but local authorities can’t enforce against themselves.

This change in the law has been backed by Labour previously and was included in the Party’s June general election manifesto but has been blocked by the Tories on two previous occasions. However, following a Labour campaign, the government now say they will support the legislation.

“Our homes are at the centre of our lives but at the moment renters too often don’t have the basic rights that we take for granted in other areas.

“Sadly families, couples and single renters alike all have fewer rights in the rental market than a person buying a fridge-freezer. Decisions made by Conservative Ministers have made it even easier for landlords to let unfit homes.

“After the terrible fire at Grenfell Tower, it’s even more important that we ensure all homes are fit for human habitation. That’s why I’m backing Karen Buck’s Bill which will ensure renters are protected legally.”