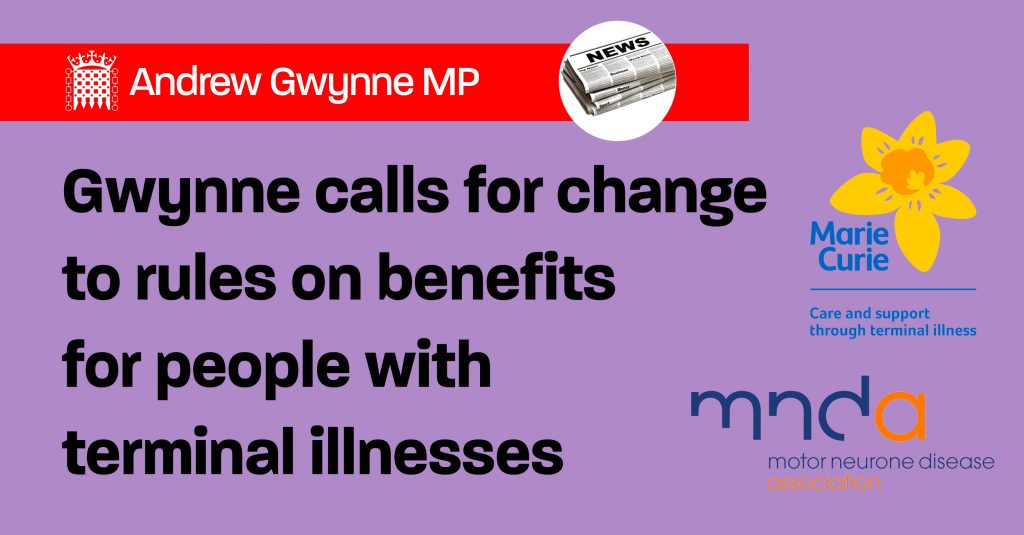 Andrew Gwynne, MP for Denton and Reddish, has backed a campaign by the Motor Neurone Disease Association (MNDA) and Marie Curie to change the law on access to benefits for people living with terminal illnesses.

The Special Rules for Terminal Illness (SRTI) is a fast-track process for claiming benefits which means that people do not have to go through a long and stressful assessment process.

However, the SRTI requires a “reasonable expectation of death with six months”. This excludes many people with an unpredictable terminal illness like Motor Neurone Disease.

The Scottish Government recently changed the law to move away from the six months definition towards a decision made by a clinician. The Scrap 6 Months campaign is calling for the UK Government to do the same.

“We are a compassionate country, but unfortunately this is not currently reflected in our social security system.

“The so-called ‘six month rule’ is inhumane and is putting unnecessary stress and pressure on terminally ill people and stopping them from getting the support they need.

“It was great to meet again with Greg Broadhurst, Chair of the Greater Manchester Branch of the MNDA, to discuss the issue. Greg is a tireless campaigner and I’m proud to join him in saying ‘Scrap 6 Months’.”