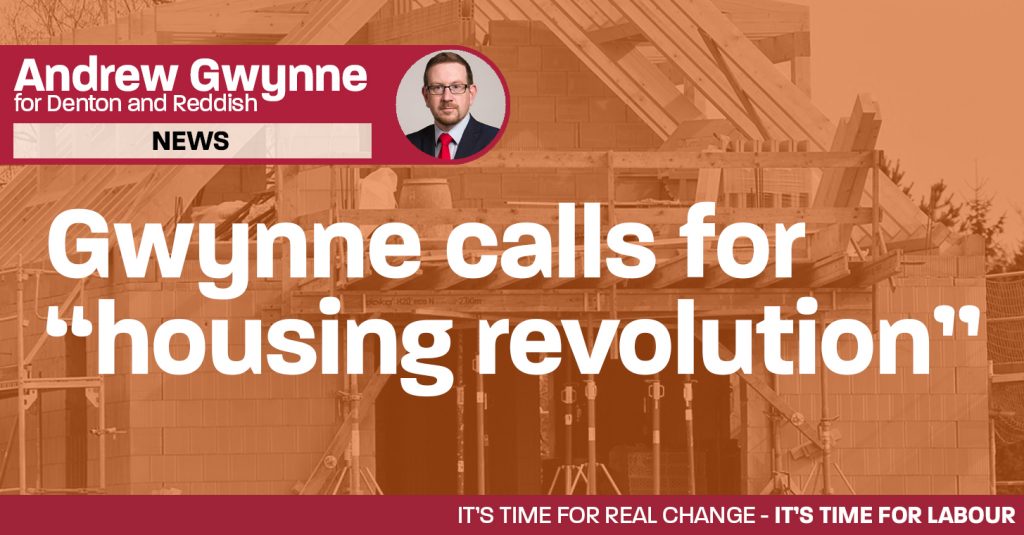 Andrew Gwynne, Labour’s candidate for Denton and Reddish, has welcomed Labour’s plans for the biggest council and social housing programme in decades.

With almost 10,000 people on council waiting lists in Tameside and Stockport, Labour has pledged a “housing revolution” with the biggest council house building programme for decades.

The homes will be built to cutting edge design and green standards, with Labour citing the new, award winning Goldsmith Street council development in Labour-led Norwich as an example of what Labour’s modern council housing could look like.

Last week, the Office for National Statistics (ONS) said that over the last two decades, there has been a 46% increase in the number of young people aged 20-34 living with their parents.

The scale of Labour’s building programme will mean that homes will be available in every area for families, trapped younger renters, and older people in sub-standard homes.

As part of the new programme, Labour will scrap the Conservatives’ bogus definition of ‘affordable’ housing replacing it with a new Labour definition linked to local incomes, including social rent – which works out at around half the level of market rents – alongside new living rent and homes for low-cost ownership.

“Everyone deserves to have decent housing, but unfortunately almost a decade of Tory mismanagement has left us with a housing crisis, where the only real winners are dodgy landlords and the very wealthy.

“We all know people affected by this crisis – whether it’s people unable to buy their own home or languishing on council house waiting lists for years.

“I am delighted that the next Labour Government is offering the real change needed to fix our broken housing system.”

“The next Labour Government will kick-start a housing revolution, with the biggest investment in new council and social homes this country has seen for decades.

“Labour’s transformational housing plans will mean thousands more genuinely affordable homes for people on ordinary incomes in every area of the country.

“Our modern council and social housing will be built to cutting-edge design and green standards providing a long-term investment in our country’s future.”