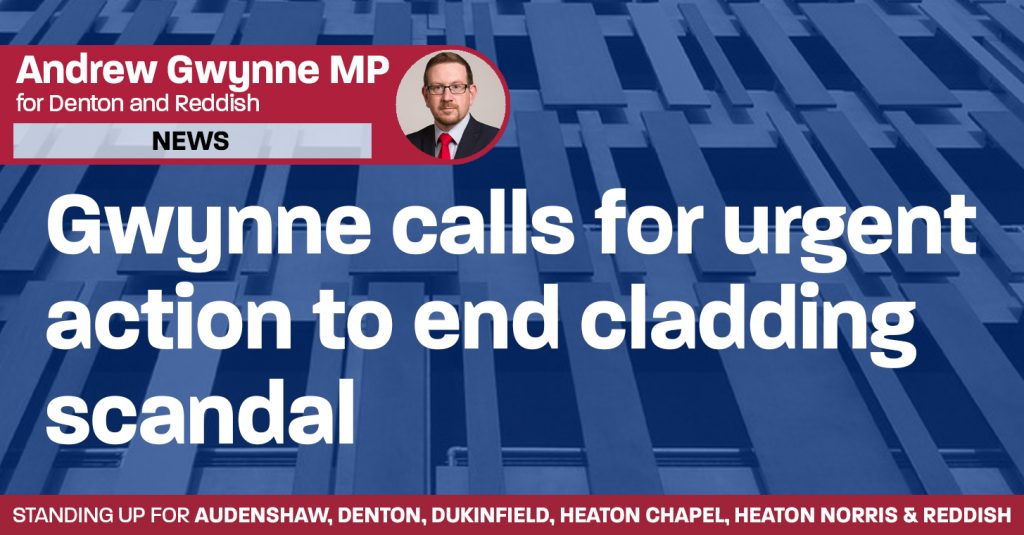 Andrew Gwynne, MP for Denton and Reddish, has called on MPs from all parties to support a Labour motion calling for the protection of leaseholders and taxpayers from the cost of removing dangerous Grenfell-style cladding.

Thousands of people in Greater Manchester are still living in flats with flammable cladding, almost four years after the Grenfell Tower fire tragedy in which 72 people died in their homes.

The Labour Party is today setting out Labour’s roadmap to safer homes, as analysis shows many thousands of homes across the country are likely to be affected by the cladding crisis.

Only a very small proportion of affected buildings in the country have been fixed so far. Families affected by this crisis cannot sell their homes and have had to endure months of lockdown in unsafe flats. As a result of guidance released by the Government in January 2020, even owners of low-rise flats and those without cladding have found themselves unable to sell their properties.

As the government has repeatedly delayed any action, many leaseholders have been forced to pay thousands of pounds for 24-hour ‘waking watches’. Across Greater Manchester, there are at least 33 buildings with waking watches, according to data released by the Labour Party today.

The Labour Party is forcing MPs to vote on this matter in Parliament today. Leader Keir Starmer is calling for the government to remove the dangerous cladding by paying for it up-front. Costs must be recouped through legal action against those responsible for the cladding crisis, he believes, arguing that leaseholders and taxpayers must not left with the bill for making buildings safe.

“This scandal has gone on for far too long. We’re now almost four years on from the Grenfell Tower tragedy and we still have thousands of people living in dangerous buildings.

“If this isn’t bad enough, in many cases leaseholders are being forced to pay for remediation even though they bought their flats in good faith. The costs of remediation, waking watches and other measures are eye-watering and are plunging thousands into severe financial difficulties.

“I have heard so many heart-breaking stories about the impact that this scandal has had on those affected – not just the financial impact, but also the impact on their mental health of being trapped in unsafe buildings, unable to sell and with bills of sometimes tens of thousands of pounds.

“The Government’s handling of this crisis has been abysmal and those living in these flats deserve so much better. I hope that MPs will come together from across party lines this evening to vote for action to end the cladding scandal.”