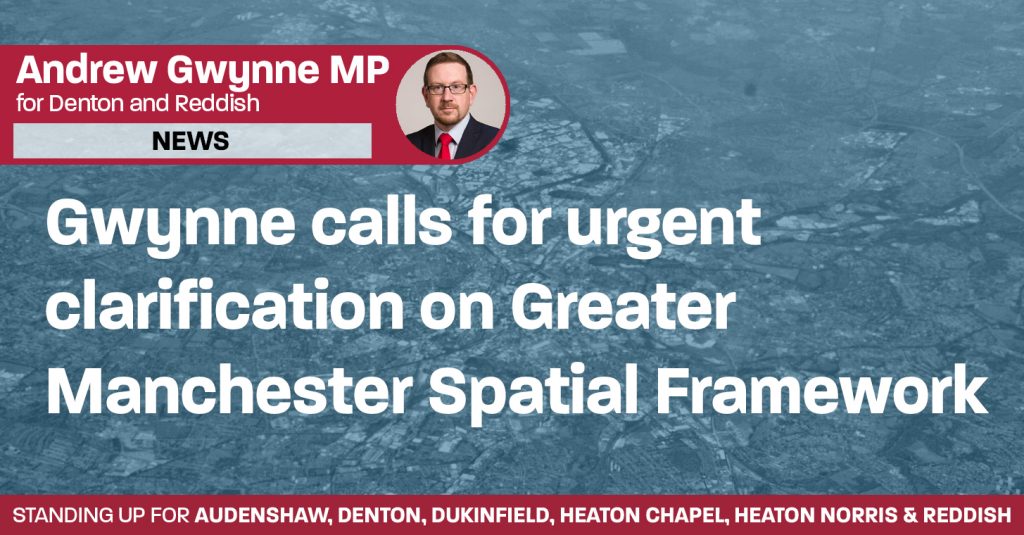 Andrew Gwynne, MP for Denton and Reddish, is calling for the Government to urgently clarify that Office for National Statistics (ONS) projections can be used as housing targets for the Greater Manchester Spatial Framework.

The Greater Manchester Spatial Framework (GMSF) is a long-term development plan which covers housing, jobs and the environment.

The Mayor of Greater Manchester, Andy Burnham, was told by the Government to stick by rigid housing targets rather than revised-down projections from the Office for National Statistics (ONS). Using ONS figures would limit the amount of green belt land that would need to be earmarked for new homes.

Last year in a parliamentary debate, the then-Housing Minister Kit Malthouse denied that the GMSF would have to use the Government’s targets and suggested that he was relaxed if the ONS figures were used instead. This turned out to be untrue and the Government has continued to expect the GMSF to use their inflated figures.

Today there is a debate in Parliament on the GMSF and the green belt. Andrew is unable to attend the debate himself as he is following NHS guidance and is in self-isolation.

Gwynne’s colleague in the Shadow Communities and Local Government team will speak on behalf of both Gwynne and the Conservative MP for Hazel Grove, William Wragg, in opposing the development at Bredbury Parkway which they say will unnecessarily take green belt land when brownfield sites are available elsewhere in Greater Manchester.

“The former Housing Minister appears to have misled Parliament over housing targets and the Greater Manchester Spatial Framework.

“Our Mayor, Andy Burnham, is keen to use the more accurate figures from the ONS, which would allow us to protect our green belt, but the Government is standing in his way.

“If Tories in Greater Manchester want to protect our green belt, then they should join Labour in calling for the Government to allow the Mayor to use ONS figures for the GMSF.

“Unfortunately, I couldn’t attend today’s debate but I remain resolutely opposed – along with my Conservative colleague William Wragg – to the green belt-grabbing, environment-destroying proposals for an extension of Bredbury Industrial Park.”