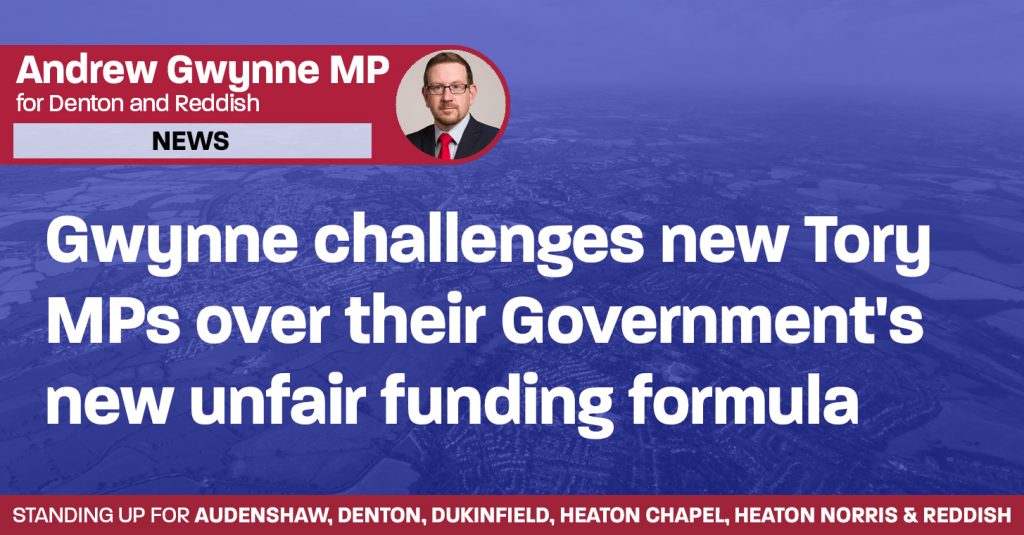 Shadow Communities and Local Government Secretary Andrew Gwynne has criticised new Conservative plans to divert hundreds of millions in social care funding from deprived Labour Councils towards leafy Tory shires. He is writing to new Conservative MPs in the areas that will be affected, asking them to back Labour in opposing these unfair changes.

New figures, published today by the Tory-led Local Government Association reveal the true impact of the Conservatives’ so-called ‘Fair Funding Review’, with hundreds of millions of pounds set to be funnelled from metropolitan councils like Stoke-on-Trent and Rotherham towards Tory shire county councils including Surrey and Buckinghamshire. At the same time, new analysis carried out by the LGA Labour Group, reveals the 35 new Tory MPs – 70% of Conservative gains at the 2019 General Election – whose communities are set to lose out, including the vast majority of the so-called ‘red wall’.

The new LGA figures, published today, reveal metropolitan boroughs are set to lose almost £300m in adult social care funding under the government’s proposed new funding formula – the vast majority of which (£250m) will be diverted to Shire counties under the Tories’ proposed new funding formula. These shifts are predicted to be the thin end of the wedge, with much greater funding transfers in core foundation funding and children’s social care likely to emerge from the Fair Funding Review

The changes flow from new formula which dramatically downgrades the importance of deprivation in assessing need, in favour of ‘per head’ funding.

These proposals hit traditional Labour areas hard – but following the 2019 General Election they now strike at the heart of the Tories’ new ‘Red Wall’ MPs in the North of England. Over 70% of new Conservative MPs (37) represent communities hit by the change.

Those MPs now have to choose between standing up for the communities or prioritising their own careers. Labour’s Shadow Local Government Secretary Andrew Gwynne, alongside local Labour Council leaders will be writing to Tory MPs in affected areas asking them to back Labour in opposing these unfair changes. Labour plans to use a forthcoming Opposition Day Debate to force the Government to account for the changes in Parliament and to challenge new Tory MPs to put their local communities ahead of their careers.

“The Fair Funding Review has been exposed as just another Conservative plan to take hundreds of millions from deprived communities and funnel it towards leafy Tory shires.

“In the new parliament 37 Tory MPs represent communities at the sharp end of these cuts. They know these changes are wrong – so it’s time for them to decide, what comes first, their communities or their careers?

“Labour council leaders are joining me in writing to every single one of these Tory MPs and asking them to stand shoulder to shoulder with us, to defend the people that they are elected to represent. This is a major test – their constituents will not forgive and not forget if they fail.”

Cllr Nick Forbes, the leader of the LGA Labour Group that carried out the analysis of how the areas represented by new Tory MPs are set to lose out, said:

“After ten years of Tory rule, the social care crisis has got worse and worse and worse. These changes will force further cuts, and further hardship – and once again the most vulnerable in society will lose out.

“Labour councils have been warning about these Conservative plans for a funding stitch up for over a year, and these new figures confirm our worst fears.

“We are issuing a direct challenge to these new Tory MPs to put their communities before their careers and join Labour in opposing these outrageous cuts.”