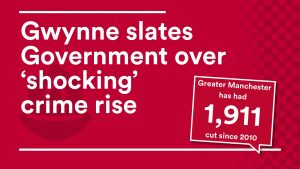 Denton and Reddish MP, Andrew Gwynne, has warned that the Tories are ‘failing to protect the public’ after new figures revealed crime in Greater Manchester has risen sharply in the past year.

Total recorded crime (excluding fraud) has risen by 41% across Greater Manchester as Tory cuts have sent police officer numbers nationwide to the lowest level in three decades. The new figures have also shown that crime has risen nationwide by 14%, the highest annual rise since comparable records began in 2002.

Police budgets have been cut by £2.7 billion in real terms since 2010 and the Government has already broken promises made by the Prime Minister and the Home Secretary to protect funding. The Police Settlement for 2018/19 promised “up to £450 million” for the police, but Labour revealed that Home Office funding for local forces will in fact be slashed by at least £100 million. Hard-pressed local taxpayers are being forced to carry the can for reckless Tory cuts.

“The public are now being forced to pay the price for the reckless risk the Tories took with public safety when they slashed 21,000 officers.

“Our police are at breaking point and these shocking figures reveal the Tories are failing in their duty to protect the public.”

“This is the grim legacy of seven years of Tory austerity; dedicated police officers fighting hard to keep the public safe with fewer officers per head than ever before. Labour will recruit another 10,000 new police officers to help fight crime and keep us safe.”