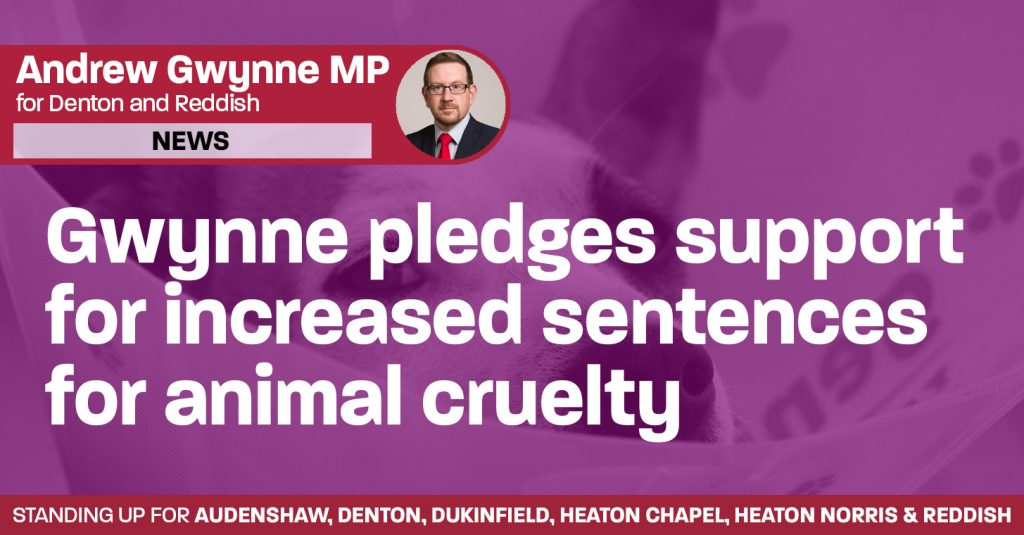 Andrew Gwynne, MP for Denton and Reddish, has pledged his support to increase maximum sentences for animal cruelty at an event run by Battersea.

Currently, Courts in England & Wales can only punish the most serious animal cruelty offences with a maximum of up to six months in prison, a banning order and an unlimited fine.

Recently the measure return to Parliament, following the introduction of a new Bill to change the law, allowing for sentences to increase to a maximum of five years for animal cruelty offences – something Battersea has been campaigning on since 2017.

The Government has already indicated its intention to support the Bill during its passage through Parliament. This change would provide the justice system with the flexibility to treat the most shocking acts of animal cruelty much more seriously than it can at present.

Northern Ireland already has sentences of up to five years, and the Scottish Government is currently legislating for five-year sentences.

Gwynne added his signature to a pledge board to underline their support for the change to the legislation.

“I was shocked to hear about some of the horrific cases of animal cruelty that Battersea have to deal with on a regular basis.

“The current maximum penalty for these crimes is neither a punishment nor a deterrent to offenders and this needs to change.

“I fully support increasing the maximum sentences for animal cruelty.”