Gwynne pledges support for pubs in Denton and Reddish 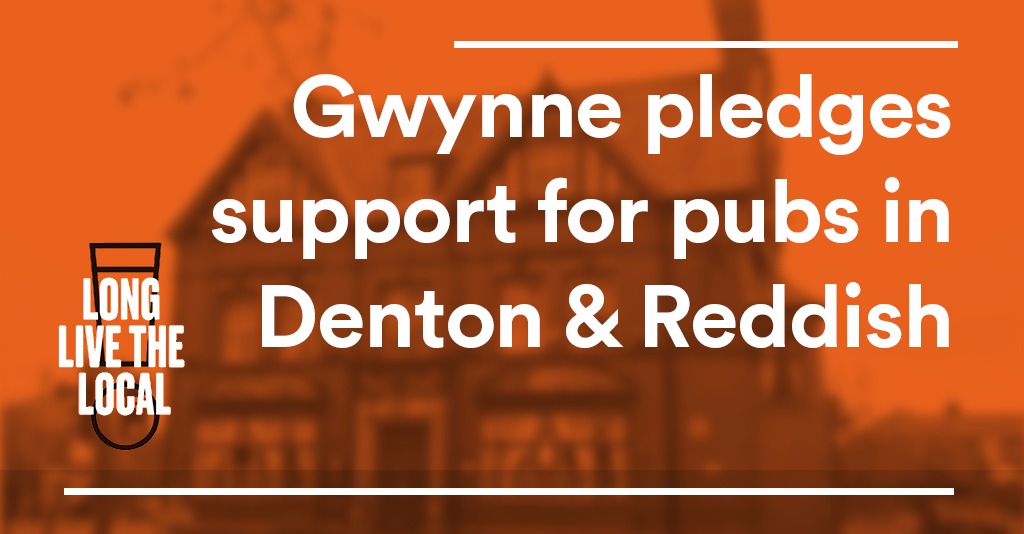 Gwynne now joins the more than 100,000 people who have signed the petition so far, including 193 in Denton and Reddish. Gwynne is calling on the Government to reconsider its position at the Budget, and to cut beer tax.

With £1 in ever £3 spent in UK pubs going to the Treasury, British drinkers now pay 40% of ll beer tax across the EU, but drink only 12% of the beer. In Denton and Reddish brewing and pubs support 831 jobs and contributes £18.4 million to the local economy – in all, there are 49 pubs in the constituency with 3 breweries with over a third of the jobs in the industry allocated to young people aged 16-24.

Across the country the beer and pub sector supports almost 900,000 jobs and adds over £20 billion in value to the UK economy, yet across the country pubs pay five times more in business rates than their share of rateable business turnover while online businesses face a much more benign tax environment.

“Pubs are at the heart of communities across Denton and Reddish, but with three pubs closing their doors for good every day the Government really should reconsider its position and cut beer tax.

“I’m supporting the Long Live The Local campaign and calling on the Chancellor to cut beer tax in order to support our local communities.”

“Beer tax has increased by 60% over the last 17 years and now the UK has one of the highest rates of tax in Europe.

“When over two-thirds of all alcoholic drinks purchase din the pub are beers, a cut in beer tax would go a long way to protecting pubs in Denton and Reddish.”