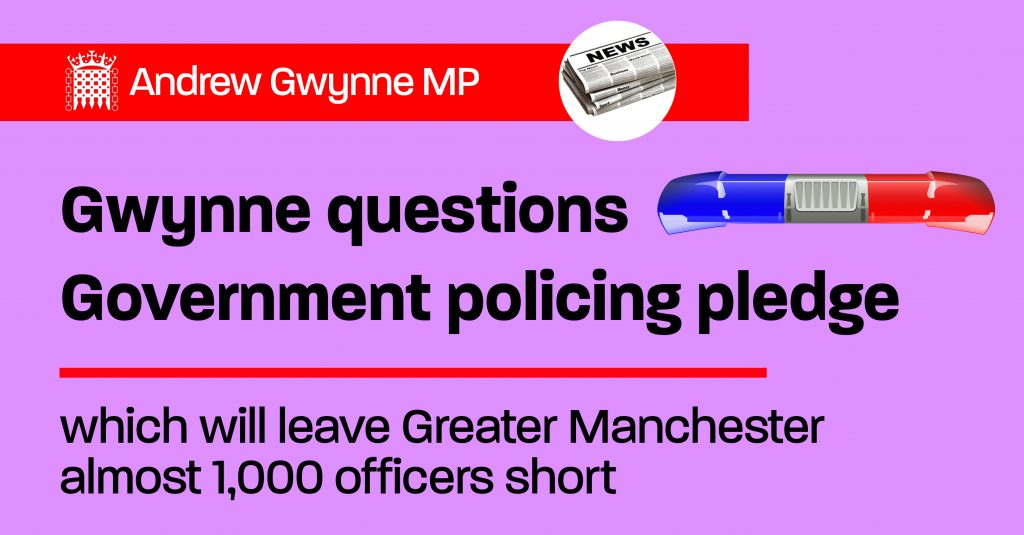 Andrew Gwynne, MP for Denton and Reddish, has raised concerns about policing in Greater Manchester after research has exposed major issues with the Government’s police officer recruitment pledge, which would leave Greater Manchester almost 1,000 officers short.

Since the Conservatives came to power in 2010, local police forces have lost 20,564 officers. The new Prime Minister Boris Johnson recently announced plans for 20,000 new officers which he said would be “on the streets”, but in reality only 13,000 will be on the frontline in local forces.

In Greater Manchester, the force has lost 1,704 police officers during the past 9 years of Conservative rule – a 21% drop.

The first year recruitment targets that the Government has set suggest that Greater Manchester will get around 5.8% of new police officers meaning that by 2022, the force might expect to have around 750 new officers – around 950 fewer than it had when Labour left office in 2010.

“After nine years of devastating cuts to our police, the Tories seem to have finally woken up to the fact that you can’t keep communities safe on the cheap.

“However, Boris Johnson’s pledge of 20,000 new police officers has now been exposed as yet another deception – even if he delivers the 13,000 new officers that are actually being proposed, Greater Manchester will  still have almost 1,000 fewer than we did in 2010.

“The police play such a vital role in our local communities and it is incredibly disappointing that the Tories continue to deprive them of the appropriate funding and resources.”