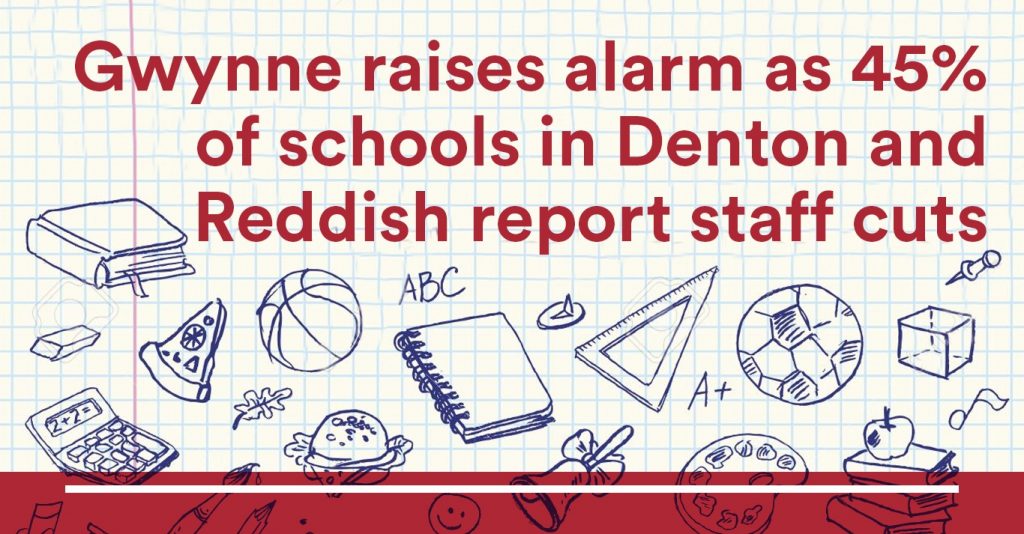 Denton and Reddish MP, Andrew Gwynne, has reacted with anger as new figures from the National Education Union (NEU) of teachers has shown that real terms cuts to school budgets instituted by central Government are beginning to have a massive impact on staff numbers.

Schools across the nation have been doing all they can to shield their students from the damage caused by £2.8 billion[1] worth of cuts to school budgets since 2015, however new figures show the lack of investment is directly affecting staff numbers and are now undeniably affecting front-line teaching.

The latest School Cuts research[2] – which are compiled using Government figures – shows that staff numbers in secondary schools have fallen by 15,000 between 2014/15 and 2016/17 despite having 4,500 more pupils to teach. This equates to an average loss of 5.5 staff members in each school since 2015; in practical terms this means 2.4 fewer classroom teachers, 1.6 fewer teaching assistants and 1.5 fewer support staff.

The cuts to front-line teaching posts are happening at a time when pupil-to-classroom teacher ratios are rising, which means bigger classes and less individual attention for children. These average figures also mask significant regional variation. Despite the Government’s claims to be concerned about underfunded areas, some of the largest staffing cuts are in the areas with the lowest average funding per pupil such as: Reading, Isle of Wight, Central Bedfordshire, East Riding of Yorkshire, York, Derby and Milton Keynes.

Locally the figures showed that 45% of all schools across the whole of Denton and Reddish have reported reductions in the number of teachers and teaching assistants in their schools due to budget cuts, compared to 2014/15. The loss of staff was consistent between both Tameside and Stockport with 44% of schools within Tameside local authority reporting staff cuts over the past two years, and 47% of school within Stockport reporting cuts to front line teaching staff over the same period.

“For years the Government have spoken about their fair funding for schools, well these figures show just how unfair the Government’s approach has been.

“Schools have had to make substantial budget cuts because of this Government’s policy and this has directly impacted on staffing numbers as staffing makes up the majority of any schools expenditure. As a result schools today are less able to give individual support to children and they cannot sustain a full range of curriculum options with class sizes rising.