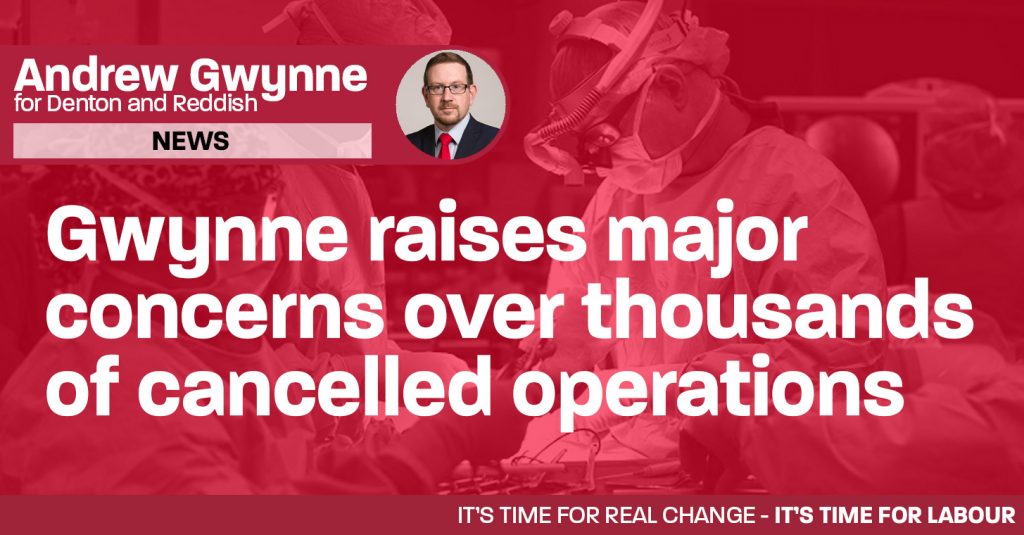 Andrew Gwynne, MP for Denton and Reddish, has expressed his concern over recent data showing a huge increase in the number of cancelled operations because of staffing issues and equipment failures.

The data – obtained by the Labour Party through Freedom of Information (FOI) requests – show that the number of operations cancelled because of staffing issues and equipment failures have each increased by a third in two years.

Labour sent FOI requests to all acute hospital trusts in England to ask them to provide the total number of operations cancelled for non-clinical reasons, broken down by the cause of cancellation. 82 per cent of hospital trusts responded.

“Unfortunately this data shows once again that the Tories can’t be trusted with our precious NHS.

“Almost a decade of Tory cuts has left our NHS at breaking point and unfortunately it’s ordinary people who are paying the price.

“December’s General Election can’t come soon enough so that our country can elect a Labour Government who will fully fund and properly staff our NHS.”

“That so many more people in pain and distress are forced to endure cancelled operations, including increasingly on the day they were supposed to have treatment, is a shameful indictment of a decade of Tory cutbacks running our NHS into the ground.

“The simple truth is under the Tories, patients wait longer and longer for vital care. This general election is about the future of the NHS and ensuring quality care for all.

“Labour will fully fund our NHS, recruit the doctors and nurses we need and safeguard our NHS from a Trump deal sell off that could cost the NHS £500 million a week.”