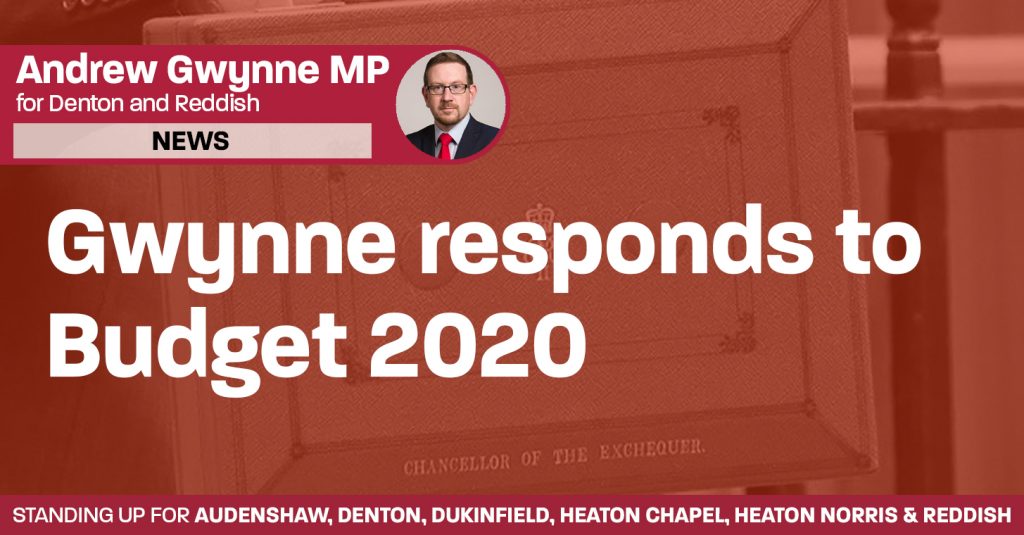 Andrew Gwynne, MP for Denton and Reddish, has responded to the Budget announced today.

The Budget is the first to be presented by the new Chancellor of the Exchequer, Rishi Sunak. Sunak became Chancellor just last month after his predecessor, Sajid Javid, resigned after being asked to fire all of his advisors.

The Budget comes as the United Kingdom faces the spread of the Coronavirus, which is predicted to cause major issues with the UK economy.

Today the Office for National Statistics (ONS) also announced that GDP (Gross Domestic Product) remained level in the three months to January 2020, following no growth in Quarter 4 (October to December) 2019.

“This Budget is a mixed bag. I welcome measures to help small businesses, particularly at a time that they are facing economic uncertainty as a result of Coronavirus. I myself have been pushing for many of these things on behalf of local businesses in the constituency.

“I also welcome promises on future infrastructure, but I think it’s important to see the detail on allocations before getting too excited.

“It is very disappointing that after ten years of cuts to local public services in Tameside and Stockport, there’s nothing extra for our councils beyond a pot hole fund, and that there’s nothing to help either social care or children’s services, which are in crisis. Similarly, there is no support for 1950s women or pensioners more generally.

“Overall, the Budget is unfortunately too little too late in many areas after a decade of cuts and declining public services. Whilst the amounts being spent are large, these measures will do relatively little to reverse the consequences of a decade of decline.”