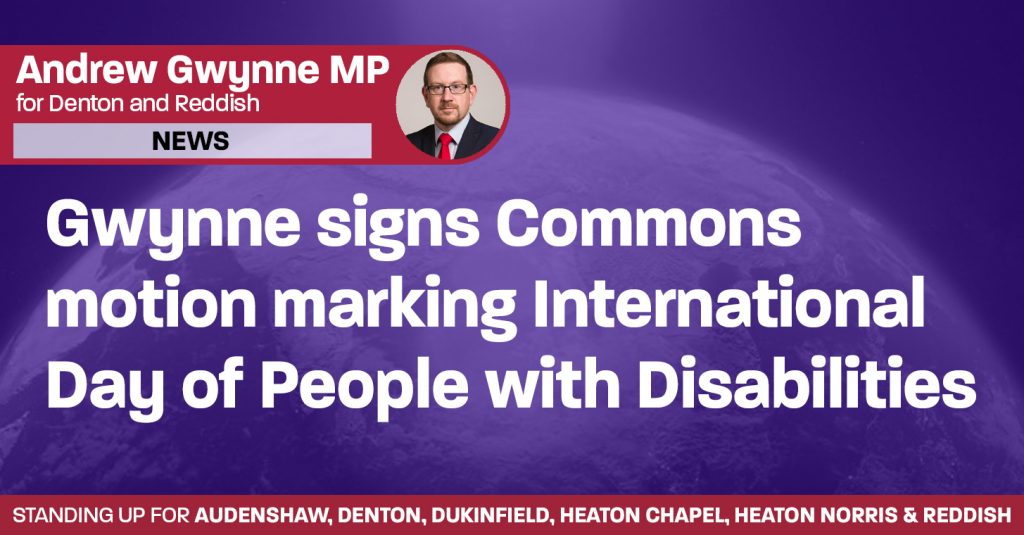 Andrew Gwynne, MP for Denton and Reddish, has signed an Early Day Motion that celebrates International Day of People with Disabilities, which takes place today.

The International Day of People with Disabilities was launched by the United Nations in 1992 and takes place on 3 December every year.

The purpose of the day is:

The theme for 2020 is ‘Not all Disabilities are Visible’. This focuses on spreading awareness and understanding of disabilities that are not immediately apparent, such as mental illness, chronic pain or fatigue, sight or hearing impairments, diabetes, brain injuries, neurological disorders, learning differences and cognitive dysfunctions, among others.

Gwynne put his name to a Commons motion tabled by Dr Lisa Cameron MP (East Kilbride, Strathaven and Lesmahagow), which states the following:

That this House recognises 3 December is the International Day of People with Disabilities, a day to celebrate disabled people and champion their abilities; supports the United Nation’s work surrounding this campaign, notes this year’s theme is entitled not all disabilities are visible, which aims to spread awareness and understanding of disabilities that are not immediately apparent such as mental illness, learning difficulties, head injury and other non-visible conditions; acknowledges that over 15 per cent of the world’s population live with a disability and that during these unprecedented times, they are likely to be disproportionately affected; acknowledges the work the all-party Parliamentary group on Disability has done to raise the profile of disability across the House; further acknowledges the fantastic work charities have done to support disabled people globally, including Leonard Cheshire, Sense and Sense International; encourages the wider promotion and protection of disability rights; understands the importance of combatting the stigma surrounding disability; and urges parliamentarians to work for an inclusive, accessible, and sustainable society for people with disabilities leaving no one behind in line with United Nations Sustainable Development Goals.

“It has been a particularly difficult year for those with disabilities, so I think that the International Day of People with Disabilities is perhaps particularly important year.