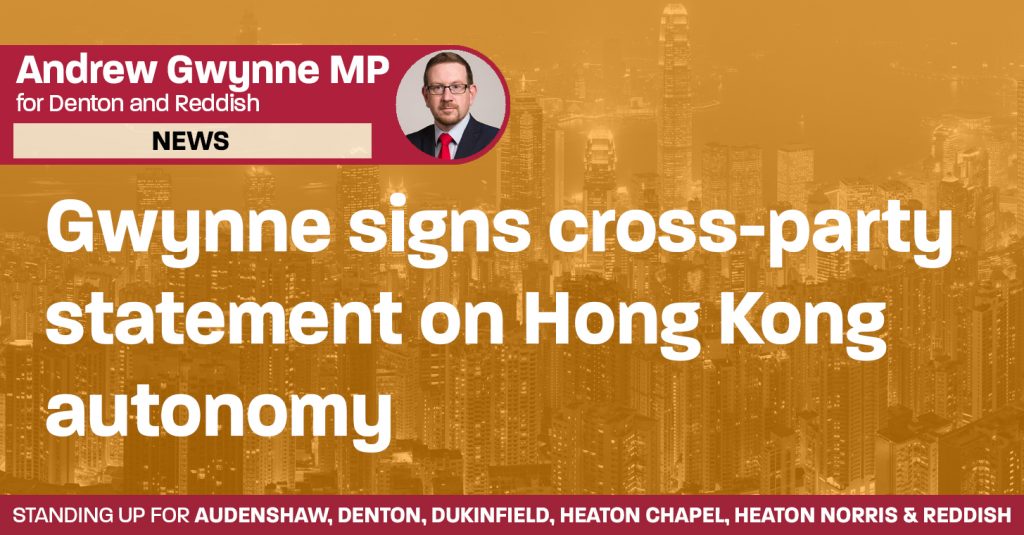 Andrew Gwynne, MP for Denton and Reddish, has added his name to a cross-party statement on Hong Kong.

The international joint-statement led by the former Governor of Hong Kong Lord Patten and the former Foreign Secretary Sir Malcolm Rifkind is a response to recent developments in Hong Kong.

Last week, the National People’s Congress of China announced its decision to enact national security legislation unilaterally in Hong Kong via Annex III of the Hong Kong Basic Law. It is expected that the law will introduce a range of vague and draconian charges to Hong Kong law including ‘subversion’, ‘secession’, and ‘colluding with foreign political forces’.

The decision to use Annex III of the Hong Kong Basic Law for Beijing to directly legislate national security legislation is therefore an unprecedented and highly controversial intervention.

“I am very concerned about recent developments regarding Hong Kong, which I think threatens the city’s autonomy, rule of law, and fundamental freedoms.

“The autonomy of Hong Kong is guaranteed by the Sino-British Joint Declaration and this is a clear breach of that agreement.

“I hope that this international joint statement will encourage Chinese authorities to reconsider this regressive move.”