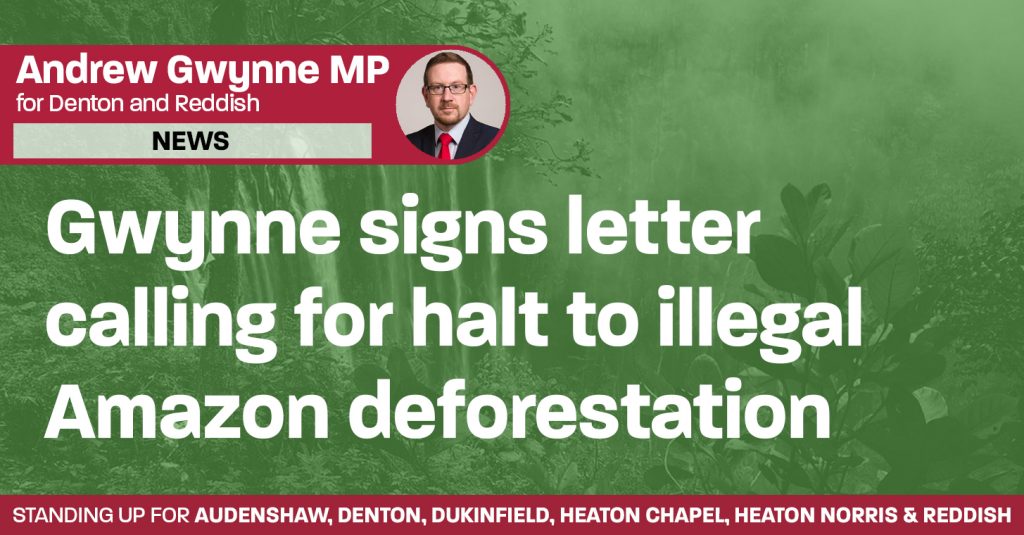 Andrew Gwynne, MP for Denton and Reddish, has signed an open letter to Rodrigo Maia, the President of the Brazilian Chamber of Deputies, calling for Brazilian parliamentarians to halt the illegal deforestation of the Amazon.

Between August, 2019 and April, 2020, deforestation in Brazil increased by 94 percent on the previous year. The World Wide Fund for Nature are extremely concerned.

President Bolsanaro of Brazil is currently pressuring the Brazilian Congress to pass legislation which will regularise the illegal occupation of public forest land. If passed, the legislation would lead to the further destruction of the Amazon, negatively impacting upon the lives of indigenous people in the region.

Parliamentarians across all sides of the House of Commons, including Gywnne, have signed an open letter, calling for the legislation to be voted against.

“Like so many across the world, I am alarmed by the increase in deforestation that has taken place in Brazil.

“The Amazon needs to be protected, not only for the wildlife in the region, but also for the indigenous people of Brazil.

“This is why I am proud to have signed an open letter to the President of the Brazilian Chamber of Deputies, calling for Brazilian parliamentarians to halt the illegal deforestation of the Amazon.”