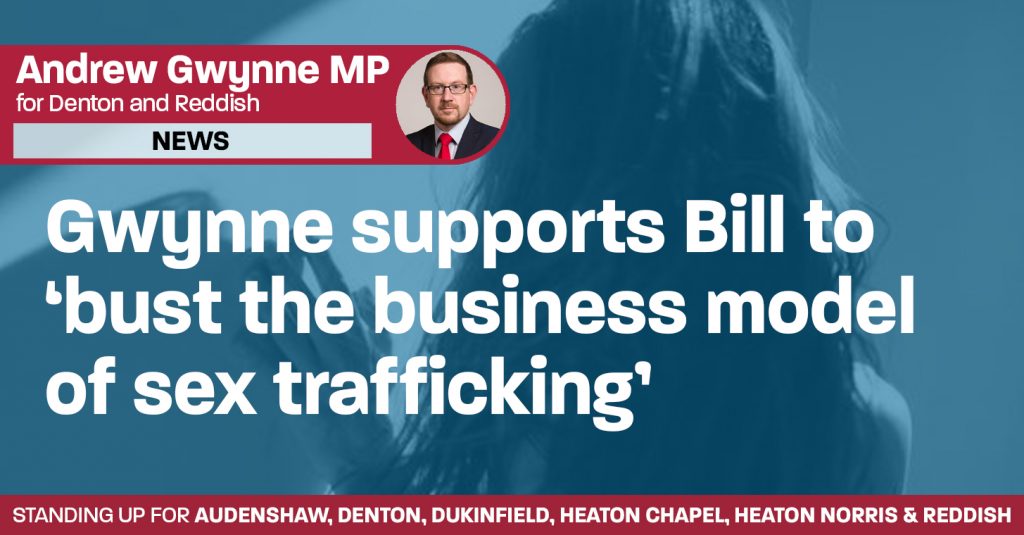 The adoption of the Sexual Exploitation Bill would bring legislation in England and Wales in line with that of Northern Ireland, France, Ireland, Sweden, Norway, Israel and Iceland – all countries that have adopted ‘demand reduction’ legislation to combat the demand for sex trafficking and sexual exploitation.

The APPG also found that the modus operandi of sex trafficking groups in the UK involves advertising victims to sex buyers on commercial pimping websites and moving them around networks of pop-up brothels and hotel rooms to be abused for profit.

Ahead of the introduction of the Sexual Exploitation Bill, Dame Diana Johnson MP said:

“Right now, the UK is a high-value, low-risk destination for sex traffickers. That is because our law fails to discourage the demand that drives sexual exploitation and allows ruthless companies to facilitate and profit from it. Commercial pimping websites operate free from criminal sanction, enabling sex traffickers to quickly and easily advertise their victims to sex buyers across the country. The minority of men who pay for sex do so with impunity, funding organised crime groups and causing untold suffering to their victims.

“My bill will bust the business model of sex trafficking in the UK. It will combat demand by criminalising paying for sex and prevent ruthless individuals from facilitating and profiting from the sexual exploitation of others. Crucially, this bill will also decriminalise victims of sexual exploitation and provide the support they need to rebuild their lives.”

“I strongly welcome Dame Diana’s Sexual Exploitation Bill. I was exploited through supposed ‘high class’ prostitution and then trafficked overseas. Since escaping my traffickers, I have spent over two decades supporting women to exit prostitution and deal with the ongoing trauma they are left with. The UK needs to criminalise paying for sex because it is the demand that fuels the exploitation that is the sex industry. Without demand from sex buyers, there would be no supply of vulnerable women and girls to be exploited in prostitution.

“I want to be part of a society that rejects the idea that people are for sale, commodities to be bought and sold by men who believe that this is their right and entitlement. I want it to be near impossible for organised crime, pimps and punters to operate here and, if they do, to face the consequences.”

“It is vital that we stamp out sex trafficking and this Bill would go a long way to busting the business models of so many sex traffickers.

“This is a really complex and difficult issue, but I think that this Bill is a really important step in the right direction and I hope that the Government gives it parliamentary time so that these thorny issues can be debated properly and vital action finally taken.”