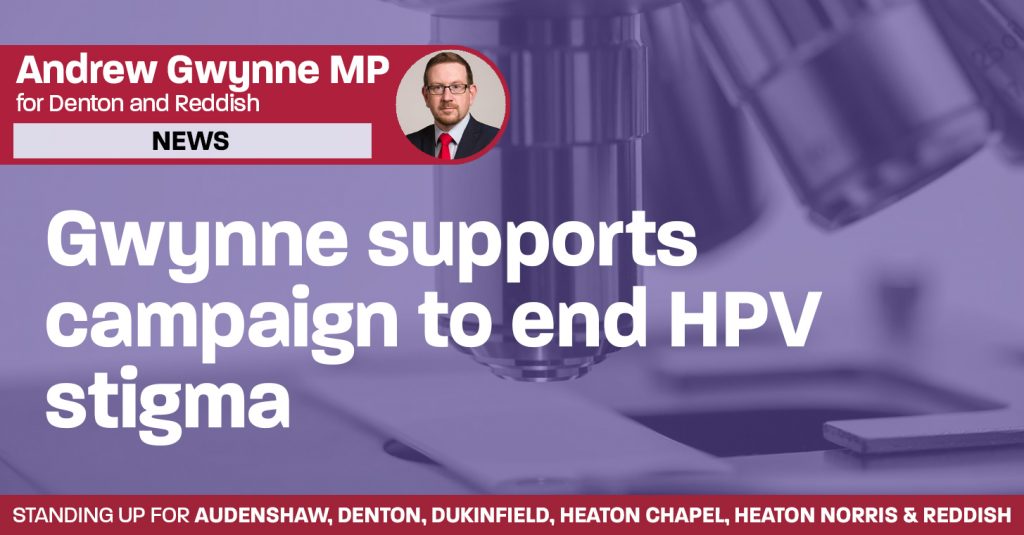 Andrew Gwynne, MP for Denton and Reddish, is supporting Jo’s Cervical Cancer Trust to tackle the myths and stigma around the common virus HPV and get the facts out.

Across the UK, cervical screening is moving to testing for HPV first, it is a far more sensitive test but also means many more women will be told they have HPV. Jo’s Cervical Cancer Trust is running its #SmearForSmear campaign during Cervical Cancer Prevention Week (20-26 January) to tackle the misconceptions about the virus.

In the majority of cases, HPV infection goes away without doing the body any harm. Sometimes it causes cells to change which, if not treated, could develop into cervical cancer. Testing for HPV is a far more accurate test estimated to prevent almost 500 diagnoses of cervical cancer every year.

Andrew Gwynne and the UK’s cervical cancer charity want as many people as possible to understand the importance of cervical screening and to feel informed and comfortable when they get their results.

New research conducted by Jo’s Cervical Cancer Trust has found a third of women consider HPV a taboo topic and would not want anyone to know if they had it. A quarter haven’t heard of HPV and one in five would feel embarrassed if they were told they had the virus. Calls to the charity’s Helpline about HPV have already risen 50% over the past year. It is expecting this to significantly rise as more women are tested for HPV and is calling on health professionals to be prepared for increases in questions from patients and encouraging open conversation.

“This campaign is really important – there is a lot of stigma and confusion around HPV and this needs to end.

“Because HPV infections don’t usually have symptoms, many are surprised to find out that 80% of people get HPV at some point in their lives.

“Some types of HPV are linked to cervical cancer so cervical screenings are really important to find these early.”

“HPV can be confusing but it is nothing to be ashamed of.

“80% of us will get at least one type of HPV in our lives and in most cases the immune system will get rid of the infection without it causing any harm.

“We need to get the facts out about HPV and get rid of harmful myths and stigma around this really common virus.”

You can find out more about the campaign here: www.jostrust.org.uk/smearforsmear