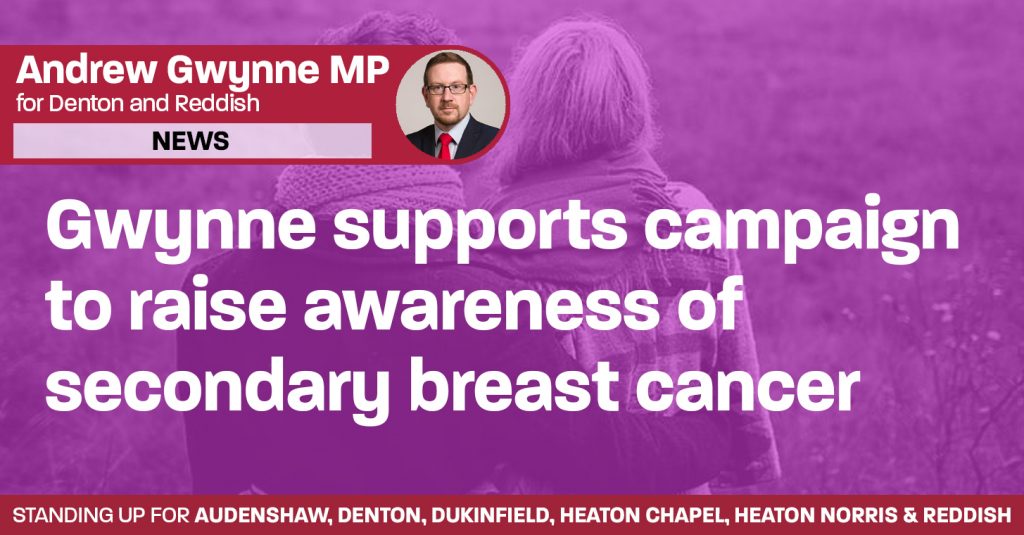 Andrew Gwynne, MP for Denton and Reddish, has given his support to the #IAmThe31 campaign which raises awareness of secondary breast cancer.

The campaign is run by METUPUK, a Metastatic (sometimes called secondary) Breast Cancer (MBC) patient advocacy group that is working to improve outcomes for those living with MBC.

The campaign, taking place during Breast Cancer Awareness Month aims to raise awareness of some of the issues that people with SBC face. These include:

METUPUK have set up a page for the #IAmThe31 campaign, which includes a video and 31 biographies of those with MBC.

“This is a really important campaign – Metastatic Breast Cancer is often overlooked, but thousands die each year as a result of this condition.

“MBC needs much greater awareness and this needs to be matched with funding so that we can combat this disease.

“I’d like to thank METUPUK for all that they do for those with MBC and for putting this fantastic campaign together. I’d encourage everyone to go to the I Am The 31 webpage to watch the video, read about people’s experiences and learn more.”