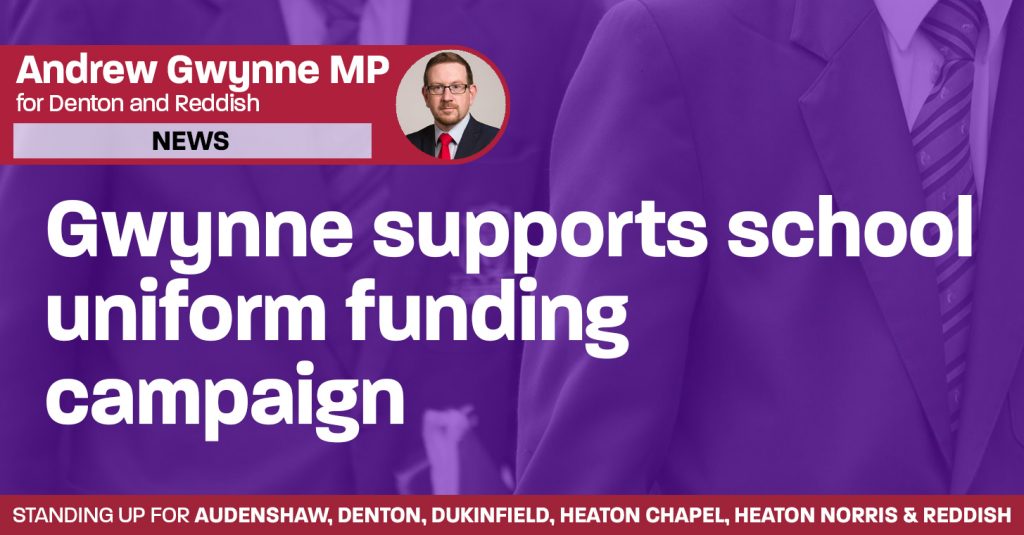 Andrew Gwynne, MP for Denton and Reddish, has written to the Government in support of a campaign on the cost of school uniform.

Gwynne has written to the Education Secretary, Gavin Williamson, and the Communities Secretary, Robert Jenrick, in support of a campaign by SIGOMA, a special interest group of 47 urban authorities in the northern, midland and south-coast regions of England.

The campaign calls on the Department for Education and the Ministry of Housing, Communities and Local Government to put an urgent case to the Treasury for funds necessary to support parents in ensuring that their children can confidently apply to the school of their choice and participate widely in those school activities which most young people take for granted.

At the moment, financial support for uniform in England is at the behest of individual schools, creating something of a postcode lottery. SIGOMA is calling for a nationwide scheme, particularly in light of the financial impact that the COVID crisis is having on families across the country.

“Financial support for families struggling with uniform costs is currently far too patchy, so I fully support the SIGOMA campaign for a national scheme.

“This is particularly important at a time when the pandemic is pushing many families into greater financial hardship.

“More broadly, I would encourage all schools to look at what they are able to do to bring down the costs of their uniform.”