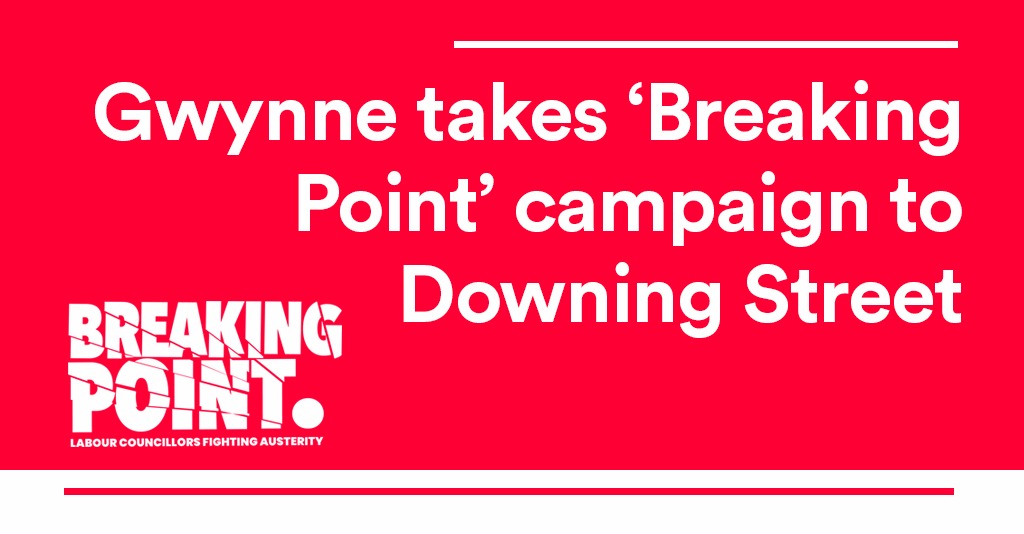 Denton and Reddish MP, Andrew Gwynne, joined a collection of local authority leaders and representatives today to hand an anti-austerity petition signed by over 5,000 Labour councillors to Downing Street.

The ‘Breaking Point’ petition is now the most-signed petition of Labour councillors ever – with 5,137 signatures collected (as of Weds 17th October) in less than two weeks, equivalent to 85% of all current Labour councillors in England and Wales. It was organised by the Local Government Association (LGA) Labour Group, led by Cllr Nick Forbes, leader of the LGA Labour Group and Newcastle Council. The petition will be handed in at 10 Downing Street at 9am on Thursday 18th October.

The cross-party Local Government Association has warned that local councils face a new round of spending cuts of £1.3bn next year, with grants slashed by 36% in 2019/20 and 168 councils receiving no central funds from government at all. The LGA has also warned that councils now face a further funding gap of £7.8 billion by 2025 just to keep services ‘standing still.[1]

After almost a decade of Tory cuts to local government many councils are now facing a crisis in funding – Northamptonshire has already gone bust, and many others are now facing bankruptcy.

The Breaking Point campaign has the backing of Shadow Communities and Local Government Secretary Andrew Gwynne MP, who said:

“This is a fantastic campaign that has my total support. Labour councillors have come together in unprecedented numbers to send a clear warning to the Prime Minister and Chancellor that austerity is driving councils to the point of total collapse.

“Councils simply cannot take any more cuts. The next Labour Government will sustainably fund our councils and put an end to this crisis.”

“Council budgets are now at Breaking Point – and Labour councillors are delivering a powerful message to the Prime Minister and Chancellor that councils simply cannot take any more cuts. If the Budget doesn’t reverse the further cuts planned to local government for next year then there is no doubt that more councils will collapse into bankruptcy, causing devastating effects for children at risk, disabled adults, and vulnerable older people.”

“A record number of Labour councillors have signed the Breaking Point petition in less than two weeks – an unprecedented coming together of councillors which shows the depth of anger and concern at the state of council finances. If the Prime Minister ‘s claim that ‘austerity is over’ is to have any credibility, she simply must find the money we need to stop vital services from disintegrating.”