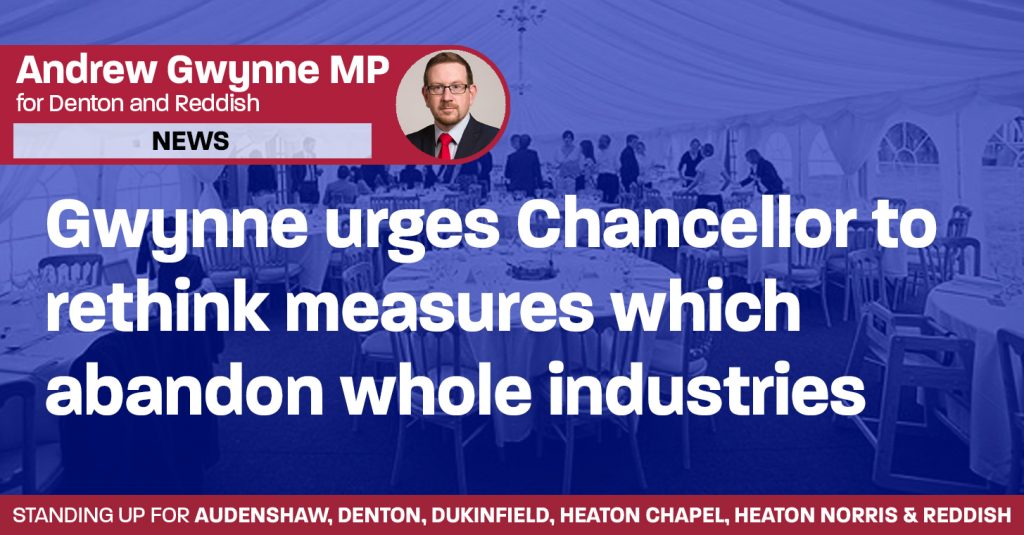 Andrew Gwynne, MP for Denton and Reddish, has called on the Chancellor to urgently reconsider the economic support that will be provided after furlough ends to avoid mass unemployment and the loss of whole sectors.

The Chancellor Rishi Sunak is dismissing workers and businesses that are currently shut down or operating at hugely reduced capacity as “unviable” – even though they are doing the right thing and following government guidance to help tackle the coronavirus.

Under Rishi Sunak, “unviable” jobs not worthy of supporting include those in the wedding industry, events and exhibitions, major parts of the night-time economy like nightclubs and pubs, festivals, sports venues and theatres.

In his ‘Winter Economic Plan’ the Chancellor completely failed to mention these businesses or acknowledge the fact that they will be forced to remain fully or mainly closed for the next six months.

The government’s Job Support Scheme is only open to those employers who offer their employees at least a third of their usual hours – impossible for those industries still closed. The scheme is also fundamentally flawed because, for every two members of staff, it is cheaper for a company to bring back one member of staff full-time and fire the other, than to have two workers working part time.

The failure of the government to implement an effective test, track and trace system means that these businesses do not have any idea of when they can safely reopen.

There are over 44,000 jobs in the North West at risk, and more than a million “unviable” jobs at risk across England, Wales and Scotland.

The businesses and workers Sunak has dismissed as “unviable” and dismissed to the scrap heap include:

“I am appalled that the Chancellor is abandoning whole industries under his latest economic support measures.

“His bizarre definition of “viable” will see hundreds of businesses go under and many hundreds of thousands losing their jobs. These industries will take years to recover and some may never bounce back.

“The Chancellor needs to have an urgent rethink – he still has time to avoid doing irreparable damage to our economy and our communities.”

“The Chancellor is writing off thousands of businesses and a million workers, dismissing sectors that are shut down as “unviable” and locking them out of government support.

“That means the wedding industry, events, clubs, festivals and arts and sports venues are being labelled unviable simply because they are following public health guidance to help tackle the virus. This is insulting and wrong, and writing these businesses off will damage lives across the country and accelerate the jobs crisis.”