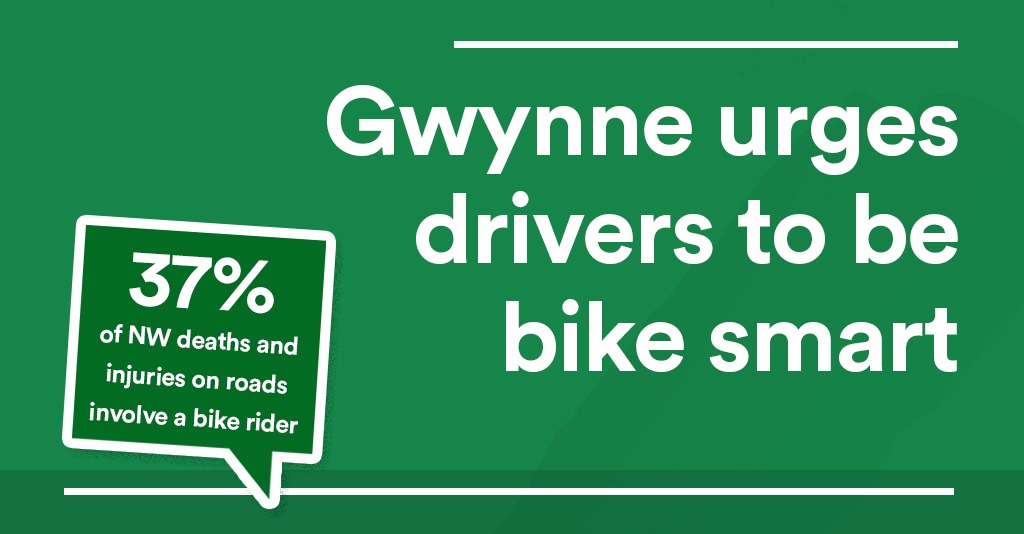 Denton and Reddish MP, Andrew Gwynne, has shown his support for road safety at a Parliamentary reception to celebrate Road Safety Week.

At an event in Parliament, Gwynne met with representatives from Brake to learn more about why cyclists and motorcyclists are amongst the most vulnerable road users and what people in the Denton and Reddish constituency can do to be more bike smart and help keep those on two wheels safe.

Analysis by Brake, the road safety charity, has found that in the North West more than a third (37%, a total of 1,026) of all deaths and serious injuries on the roads was a bike rider [2]. Brake’s analysis has also highlighted the high vulnerability of those on two wheels, who, in comparison with car drivers, are on average 34 times more likely to be killed and 63 times more likely to be killed or seriously injured, per mile travelled, on British roads [3].

Those on two wheels also face increased danger on our rural roads. Two-thirds (301) of bike deaths in 2017, an average of 25 a month, took place on rural roads [4] – the highest number of bike deaths on Britain’s rural roads for more than five years. Concerning, the fatal crash risk facing bike riders on rural roads – which accounts for miles travelled – is also at its highest since 2010 [5].

Gwynne heard how Brake is calling for drivers to be ‘Bike Smart’ this Road Safety Week by following a few simple steps: slowing down, giving more time to spot danger and react; looking properly for bikes before pulling out at junctions; leaving at least 150cm between cars and a bike when overtaking; and by doing the ‘Dutch reach’, using the opposite hand to open a car door to help avoid ‘car dooring’ incidents. [6]

“I’m delighted to support Brake in their Road Safety Week campaign. It was really fascinating to learn that in the North West more about how more than a third of all deaths and serious injuries on the roads was a bike rider.

“We’ve got to do more to ensure the roads are safe for cyclists and motorcyclists.”

“I am delighted that Gwynne has shown their support for Road Safety Week, helping raise awareness in the Denton and Reddish constituency about the safety of those on two wheels. Every hour, a cyclist or motorcyclist is killed or seriously injured on a British road – each a tragedy that will devastate innumerable lives. We can all be more Bike Smart in the hope that we can put an end to the tragedy of death and serious injury on our roads.” Further details about Road Safety Week can be found at www.roadsafetyweek.org.uk

[6] The ‘Dutch reach’ is a technique which seeks to avoid car dooring. Instead of using the hand nearest the door to open it, reach across with your opposite hand. This forces you to turn your head so you can check for bikes before you open the door.