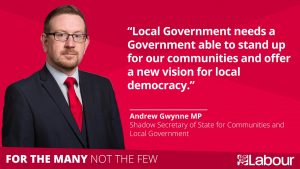 New research conducted by the Labour Party has shown that Council Tax increases proposed by the Government will do little to address the funding black hole created by local government cuts.

The money local government has to operate services is running out fast and councils face an overall £5.8 billion funding gap in just two years. The Government failed to provide the funding to address this funding gap in the Autumn Budget, and many looked to the Local Government Finance Settlement to set out its plan for how it will fund local services both now and in the future.

Independent House of Commons research commissioned by the Labour Party has suggested that the move will raise only £219 million next year – barely making a dent in the £2 billion shortfall in children’s services, the £600 million cost to councils of paying for the Government’s National Living Wage next year, as well as the growing funding gap.

Rather than providing new money, the Government has passed the buck for funding our public services onto already struggling households, and local authorities who resist will be blamed by the Government for their failure to draw on all available funding options.

Relying on council tax as a solution to the funding crisis is not a solution. Local authorities with the greatest need, and often those with a weaker tax base, will be unable to raise as much income through this flexibility than those authorities with a stronger tax base. The Nuffield Trust analysed the impact of the social care precept finding that in 2016, local councils in the ten most affluent places in England were able to raise almost 50% more per head of local population than those covering the ten least well-off areas.

Labour recognises that each Council area has a much different ability to raise income locally and so this needs to be considered as part of a wider fair redistribution mechanism, linking social need, health inequality, urban deprivation and rural sparsity.

“The local government finance settlement has been a complete shambles. After almost eight years of cuts, councils are facing unprecedented pressures to balance their books.

“This task has been made even harder by a government that has no grasp on the figures.

“Only Labour will stand up for working people. That’s why we need to see as many Labour Councillors as possible elected to stand up for our local communities on the 3rd May.”