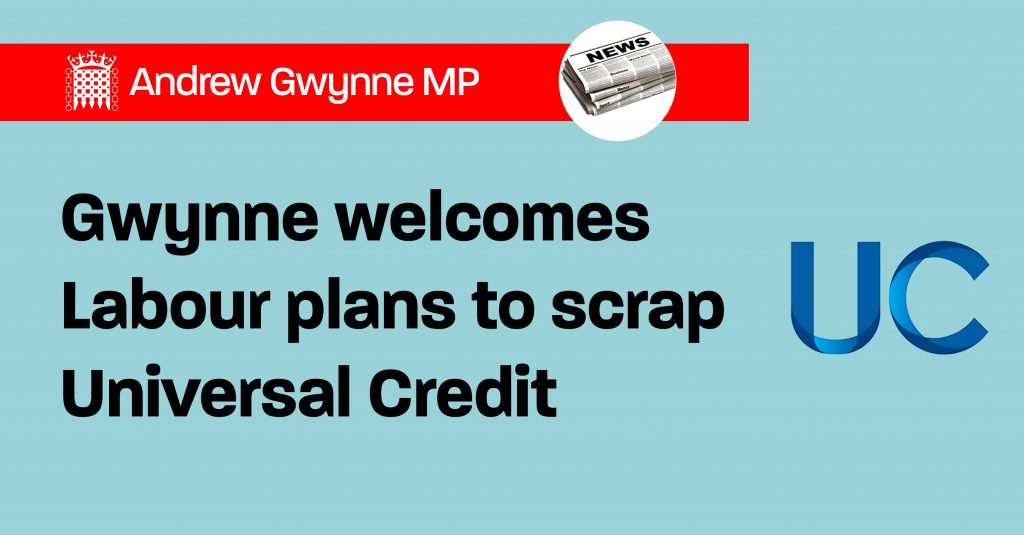 Denton and Reddish’s MP Andrew Gwynne has welcomed Labour Party leader Jeremy Corbyn’s announcement that a Labour government would scrap Universal Credit and replace it with a social security system that focuses on “alleviating and ending poverty, not driving people into it”.

The move comes after a year-long review into the social security system by Labour’s Work, Pensions and Equality Policy Commission. The review was led by Margaret Greenwood MP, co-convenor of the commission and Shadow Secretary of State for Work and Pensions.

Labour MPs, including Andrew Gwynne have repeatedly held the government to account in Parliament on the roll-out of Universal Credit and have long drawn attention to the link between the system and increased food bank usage and the rise in poverty levels across the UK.

In government, Labour would scrap Universal Credit; this major policy change cannot be delivered overnight, but Labour would introduce an emergency package of measures and:

The latest figures from the House of Commons Library show that, as of May 2019, in Denton and Reddish, there were 3,194 households claiming Universal Credit, of which 47% were households with children.

“I am delighted that Jeremy Corbyn has announced that a Labour government would scrap Universal Credit.

“Our welfare system should be based on supporting those who use it, rather than punishing them.

“The current system is deeply flawed and the implementation has been shambolic, leaving many families in my constituency struggling to get by.”

“Universal Credit has been an unmitigated disaster. As well as being behind schedule and over budget, it is inhumane and cruel, driving people into poverty and hardship.

“The Tories told us that Universal Credit would make work pay, but we have seen the opposite. More and more people who are falling into poverty have jobs, and more and more children who are growing up in poverty are living in working families.

“Labour will introduce a new system based on the principles of dignity and respect and it will alleviate and end poverty, not drive people into it.”

“Universal Credit was meant to lift people out of poverty, simplify the social security system and smooth the transition into work.

“Instead it is failing those in need, pushing many into debt and rent arrears and forcing them to rely on food banks to survive.

“The two-child limit and the benefit cap are driving up child poverty, and the sanctions regime is punishing people instead of supporting them.

“Labour will scrap Universal Credit, put an end to the benefit cap and create a social security system that, just like our NHS, treats people with dignity and respect and is there for any one of us in our time of need.”