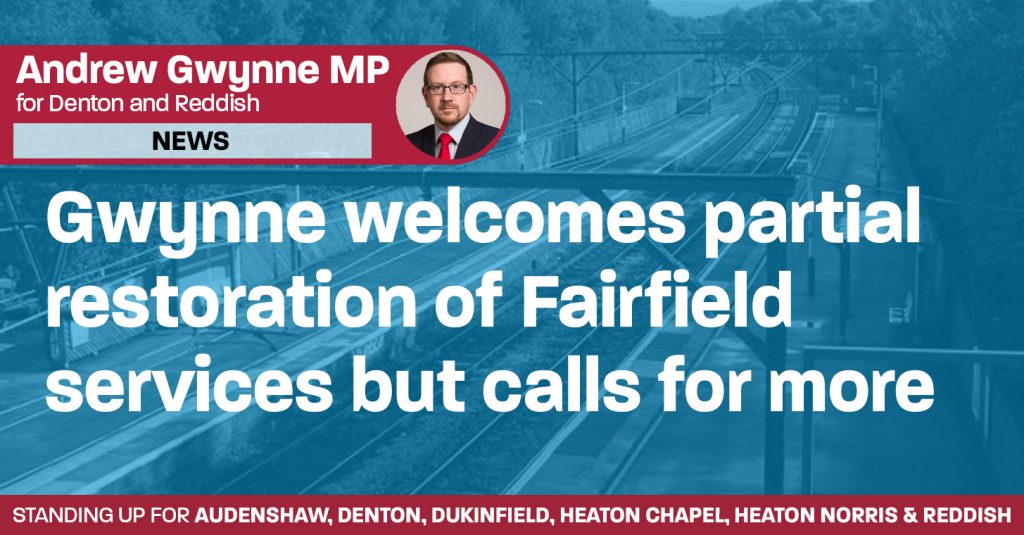 Andrew Gwynne, MP for Denton and Reddish, has welcomed the partial restoration of services at Audenshaw’s Fairfield Station, but is continuing to push for full restoration.

Today (9 October), Gwynne had an online video call with Northern Trains who have confirmed that some passenger rail services will be restored to Fairfield Station in Audenshaw from 26 October, as promised following Gwynne’s lobbying of Ministers in Parliament alongside Jonathan Reynolds (MP for Stalybridge and Hyde) and William Wragg (MP for Hazel Grove).

Northern has confirmed that from 26 October, there will be a 90 minute service. As this is not yet fully restored to normal levels, the Metrolink ticket acceptance will still operate, as will the ‘ring and ride’ taxi service.

On 14 December, it is expected Fairfield will be served by an hourly service, at which point the alternative ticketing arrangements will stop.

This is dependent on what COVID restrictions may or may not be put in place in the coming weeks which might have an impact on Northern’s workforce.

The train company has also confirmed that upgrade work to the Fairfield Station platform will be taking place in the next week or so, with the platform coping stones being re-laid, the surface evening out and the furniture and railings being repainted.

“This is a really important service for people in Audenshaw and the surrounding area and it never should have been stopped.

“I welcome that there will be some service, but will be closely monitoring the situation to ensure that Northern does not backslide on a return to the full service.”

“We know that many Audenshaw residents rely on this service every day.

“While this partial restoration to normality is welcomed, we will continue to push for full reopening and improvement of this important train service. Northern must do better.”