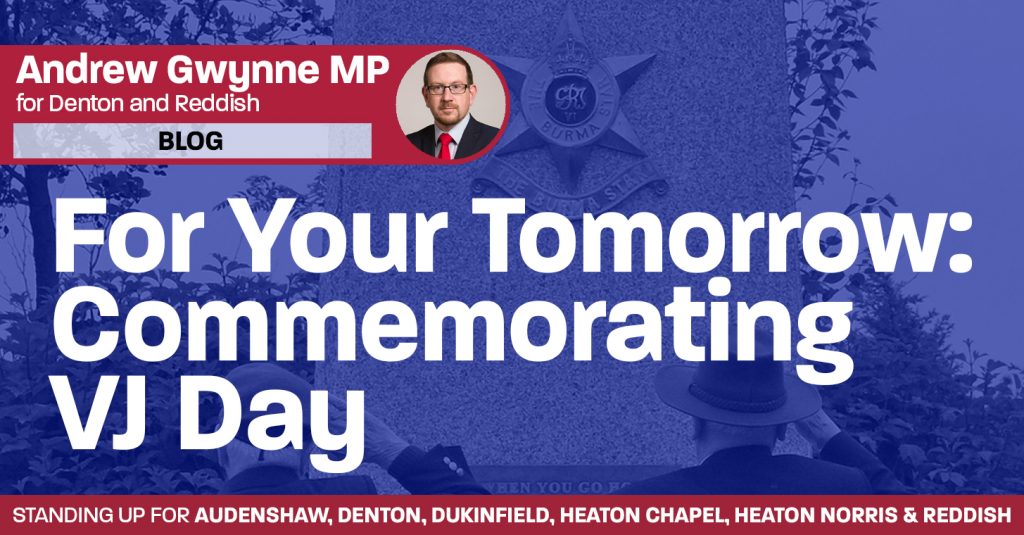 In this country, when we think about the Second World War, the images that tend to come to mind are of the beaches of Normandy, the bombed-out Blitz-hit cities and towns of England and the battlefields of France and Belgium. This is very understandable – the war in Europe was very close to home and the threat from Nazi Germany and her European allies very real.

But this is far from the full story, British servicemen were also engaged in the deserts of Egypt, the frozen seas of the arctic circle, the tropical jungles of the Far East and elsewhere.

Today is a fantastic opportunity to remember and give thanks to some of these brave people, marking as it does the 75th anniversary of Victory over Japan (VJ Day). 75 years ago today, Emperor Hirohito of Japan announced his country’s surrender and thus the end of one of the bloodiest wars in human history.

Between December 1941 and August 1945, British and Commonwealth troops (largely from India, but also from Britain’s African colonies, Malaya, Burma, Fiji, Tonga, Australia, New Zealand and Canada) fought the Japanese in Asia. The conditions were incredibly difficult and unfortunately the bravery and heroism of these troops is often overlooked. In fact, the Fourteenth Army that fought in Asia, led by General Slim, has become known as the “Forgotten Army”, even though it was the largest army in the world in 1945 with almost one million soldiers.

The recent stories about Captain Tom Moore, one of the heroes of Coronavirus, who served in India, Burma and Sumatra (now part of Indonesia) has raised the profile of these veterans a bit, but it would be great if much more was known.

Sadly, just as with VE Day earlier this year, the 75th anniversary of VJ Day will not be celebrated in the way that we would most like, as a result of Coronavirus restrictions. However, the Royal British Legion do have some brilliant plans, including a Service of Commemoration at the National Memorial Arboretum in Staffordshire, a national moment of Remembrance, and an interactive VJ Day map, hosted on its website, telling the stories of those who lived through the conflict.

I am particularly pleased that the Legion will be acknowledging the contribution of the Commonwealth forces who fought alongside British soldiers, who came from across Europe, Africa, Asia, North America and Australasia to form one of the most multicultural forces in history. This is an important part of our national story that is too often forgotten.

We owe a great deal to our veterans and I think that the reason for this is very well summed up by an inscription at the Kohima War Cemetery in Nagaland in North East India. The Cemetery contains memorials and graves of over 2,300 British and Commonwealth soldiers – Christians, Muslims, Hindus, Sikhs and Jews – and the inscription reads:

When You Go Home Tell Them Of As And Say

For Your Tomorrow, We Gave Our Today

The peace, freedom and democracy which we enjoy today is down to the bravery of those who fought and gave their lives during the Second World War. We will remember them.

Find out more about VJ Day on the Royal British Legion website.