GWYNNEBLOG: Let’s bring our community back together 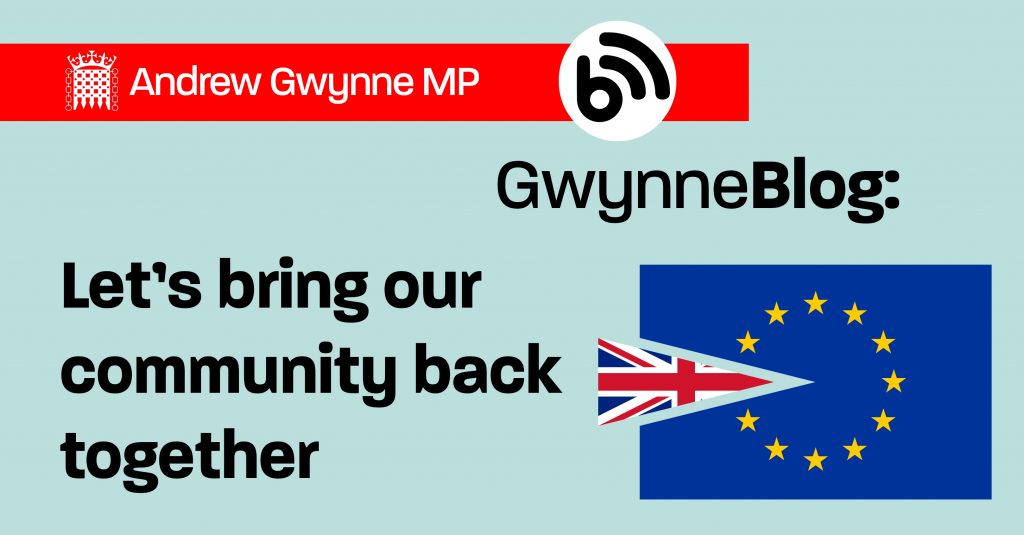 These are the three emotions that I most often encounter in people when the topic of Brexit comes up. People who voted leave angry that we haven’t left yet or that we’re leaving in a different way to what they would prefer, anger from remain voters that we’re leaving at all, boredom with all this talk of customs unions, backstops and dynamic alignment, frustration that this can’t all just be over so that we can move on and talk about something – anything – else.

All of these reactions are perfectly understandable, and I confess that I have felt angry, bored or frustrated at various points during the Brexit process. I do firmly believe, however, that none of us make our best decisions when we are any of these three things. Instead, we should be calm, clear-headed and well-informed.

For instance, I’m sure all of you have had the experience at some point of shopping while you’re hungry. You start filling your trolley with whatever you fancy eating right at that moment and leave having spent far too much on food you don’t really need. And that’s just a small decision – when it comes to big decisions, we need to be even more careful that emotions don’t cloud our judgement – and there’s no decision bigger than how we leave the European Union.

I’ll be frank and tell you that I find Brexit a very difficult topic to deal with. As you will probably know, for every three people in Denton and Reddish who voted to leave three years ago, two voted to remain. Nationally, leave won by 52% to 48% – close perhaps, but decisive. I have always believed that the result of the referendum should be honoured.

This is something that you’ll hear a lot of politicians say, but what does it actually mean? This is where people start to disagree. On the ballot paper, the question was “Should the United Kingdom remain a member of the European Union or leave the European Union?” As has been pointed out, this means we know that the British people wanted to leave the EU but not how they wanted to leave. During the campaign, various options were put forward – the Norway Model, the Switzerland Model, Canada Plus, Canada Plus Plus – the list goes on.

The truth is that there are thousands upon thousands of different ways that the United Kingdom could leave the European Union, each with its own implications for our future prosperity, jobs and security. With so many options and so many different views on what “Brexit” really means – and almost half of British people being against leaving at all – it’s obvious that most proposed deals will make a significant number of people very unhappy.

The referendum was incredibly bitterly-fought and the nastiness and viciousness which was present in that campaign has only intensified since. It is commonplace to hear supporters of one side or the other throw insults at the other or dismiss millions of their fellow citizens as either too stupid to understand what they were voting for or as traitors to their countries. Neither of course is true.

Unfortunately, many politicians have looked to play on these divisions for electoral gain, whilst many in the press and media have been keen to present it as a black and white, leave versus remain issue. This has further polarised people so that there is significant support for both a no deal Brexit and stopping Brexit altogether by revoking Article 50 – two outcomes which nobody was seriously suggesting the day after the election. More worrying still, I have come across a growing number of people who seem to care more about their side “winning” than about what is in the best interests of our country.

This tends to mean that coverage in both the media and – particularly – on social media of the Brexit process in Parliament tends to oversimplify and distort the truth so that every vote is presented as being for or against Brexit. The government – whether this one under Boris Johnson or the previous one under Theresa May – has been keen to push this too. Whenever a vote hasn’t gone their way, they tell the public that MPs are trying to stop Brexit. It’s certainly true that a small number of MPs are campaigning to stop us leaving the European Union, but most of us – myself included – are not. We are concerned about the Brexit deals that have been put forward and don’t believe that we should accept a bad deal just to get it done.

Interestingly, this approach was once shared by our current Prime Minister, when he twice voted against Theresa May’s deal. He – and many other Brexit-supporting members – did not believe that it was good enough. If they had, perhaps we would have left the EU back in March. Now he has his own (very similar) deal, but there are still plenty of Brexit-supporters who oppose it – including Nigel Farage and his Brexit Party and the DUP.

I think that the issue is that there are divisions not just between leave and remain supporters, but also inside those two groups. This is why we need to find a solution that can bring together as many as possible of both the 52% and the 48%. Only by doing this do we stand any chance of healing these divisions and bringing our communities back together. That means some sort of compromise – leaving behind the absolutist positions that have become so popular and finding some sort of common ground. This isn’t easy and ideally it would have been pursued back in summer 2016, before the divisions deepened and views polarised. But I believe there is still time.

You might be thinking we should just “get Brexit done” – no need for any more time. That’s certainly the message that the government is pushing out. They wanted to put pressure on Parliament to vote everything through in a couple of days – a process of scrutiny which would normally take around a month. Last night, their Brexit Bill passed second reading meaning that it could now be scrutinised in further detail. When the timetable of a couple of days was rejected, they did something very strange. Rather than propose a new timetable, they decided to “pause” the legislation, delaying the votes that could see us leave the EU with their deal.

I would hope that they may still come to some arrangement for a new timetable, so that we can scrutinise their deal and propose and vote on improvements. However, even if the Government’s deal does pass, it would be wrong to think that this would be the end of Brexit. Far from it I’m afraid – the nature of the deal is that it’s just the start of a long process that will last for many years as we negotiate new bilateral country-to-country reciprocal arrangements and fresh free trade deals in detail. If you’re angry, bored or frustrated by Brexit now, this particular deal just stores up far more of the same.

I fully understand why so many constituents are keen to just get Brexit done and out of the way, but unfortunately supporting this deal will not achieve this. I hope that the Government brings back the Bill with a new timetable, which will allow me to vote for amendments that improve the deal and ensure that the Brexit we end up with works for as many people as possible, regardless of how they voted in 2016.