GWYNNEBLOG: My story with mental health 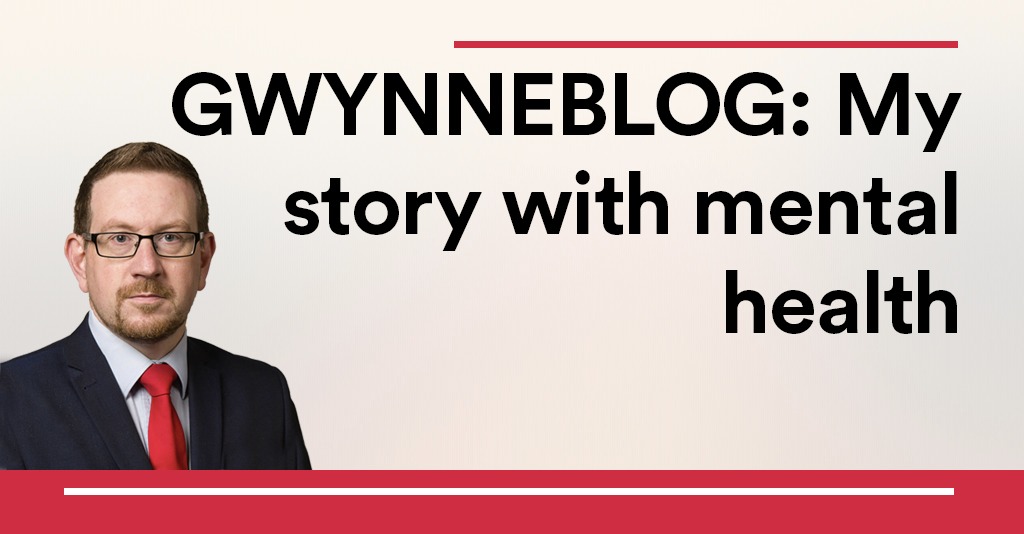 This Wednesday marked World Mental Health Day. There’s still far too much stigma around mental ill-health, and yet most of us will be affected by it at one stage in our own lifetime… and by most of us, I mean nobody is immune from it.

Now here’s a confession. There’s a history of mental ill-health in my family; we’ve been affected by suicide, attempted suicide, addiction. And the infamous ‘Black Dog’ hasn’t just imposed himself on my relatives, he has a kennel in my head too.

Until recently, the law prevented anyone with a mental infliction from holding public office; something that perpetuated both the stigma and a reticence to talk about mental health in the public domain. Thankfully this law has now been changed, so here’s my story…

I’ve always been an up-and-down kind of person throughout my early life. I guess it’s my personality (that and being a Gemini, there’s always been two of me to contend with) but my downward spiral really hit in 2010 when a serious illness nearly killed the 35-year-old me… worse, it hit in the course of the General Election of that year. Just the worst possible time, and my family, friends and team hid it well.

I have three children, then aged 12, 10 and 8 and the thought of me not being there for them as they grew up (I lost my mum when I was 19 from ovarian cancer and I’ve never really got over that loss) was thankfully enough to pull me through, but the experience scared the life out of me to the extent that I could barely get out of bed. That feeling of helplessness, of raw numbness is just awful. Endless crying. Horrid. The lack of self-worth. Horrendous.

Now, for those who know me, I hope you’ll be surprised that someone who works so hard to help others can feel such a sense of helplessness themselves. Mental illness is cruel like that.

I’m now on an even keel. In fact, in many ways I’ve never felt better in myself. I’m enjoying life, loving my job and I’m surrounded by great friends and a brilliant family (especially my long-suffering wife, Allison).

Yes I’ve had counselling, both through the NHS and, thanks to the very kind understanding of these issues by Speaker Bercow, through the House of Commons too. I’ve also been on medication since 2010: 40mg of Citalopram to be precise – and boy does that help – it doesn’t totally get shot of my ‘Black Dog’, but it lessens his impact… and it keeps me smiling.

In fact, I’ll end on this. At the start of the 2017 General Election, I was asked why, with Labour 25% behind the Tories, was I so damned cheery? “Oh it’s the pills, not the polls” I said. The interviewer laughed thinking it was a joke.