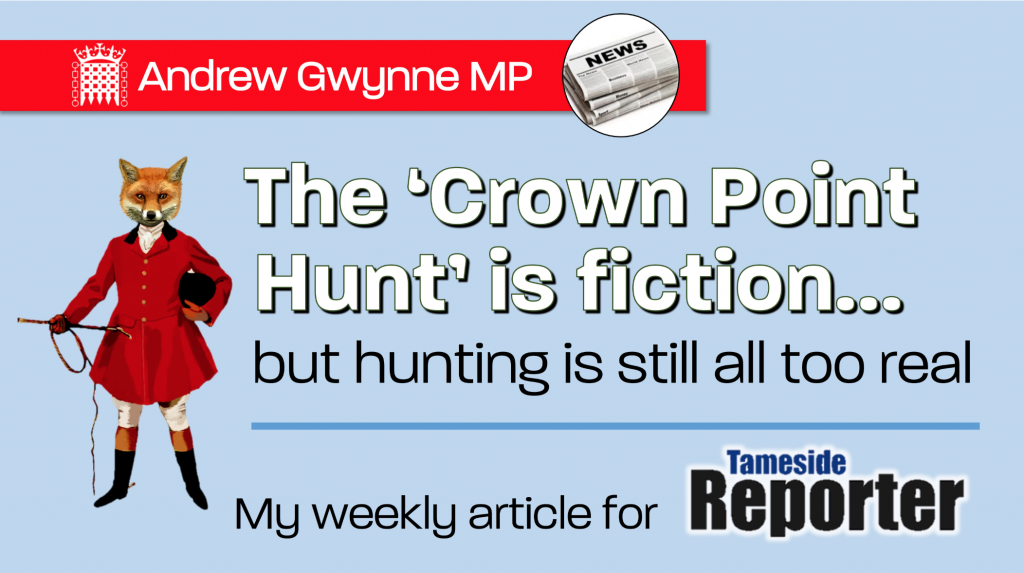 Tally Ho! Today I’m reporting on the Crown Point Hunt. The beagles are barking and the horns are blowing as the men and women dressed in their redcoat finery trot along Windmill Lane in Dane Bank.

Then the scent is found. There must be a fox around… yelping to get off, the beagles track down the fox. Through Crown Point the chase runs as the trot now speeds up to a gallop. Now in Audenshaw, Mr fox, a wily creature, has darted down Shepley Brow.

Alas, the hunt is over. On reaching the Peak Forest Canal in Dukinfield the fox has managed escape from the pack.

Now this might seem a far-fetched image (if fox hunting ever occurred in my constituency, it’s long gone given decades of urban development) but it was still commonplace in parts of Tameside until very recently. Thankfully it’s now something Tamesiders will only see in cartoon form in Mary Poppins (the fox escapes there too).

That’s because this year we celebrate the 15th anniversary of the introduction of the Hunting Act which banned the practise of hunting wild mammals with dogs across England and Wales.

There are still more than 300 active hunts across Great Britain, the majority of which now claim to be ‘trail’ hunting. Despite these claims, hunts are still being witnessed chasing and killing foxes, hares and deer, and rampaging across private property with no care or consideration given to the people and pets that live there. More than half of people prosecuted under the Hunting Act claimed they were trail hunting and did not know their dogs were chasing an actual animal.

Some want to reverse the Act, but 85% of the public are in support of keeping the ban on fox hunting. So let’s tighten up the law so it can’t be abused in this way in the future.