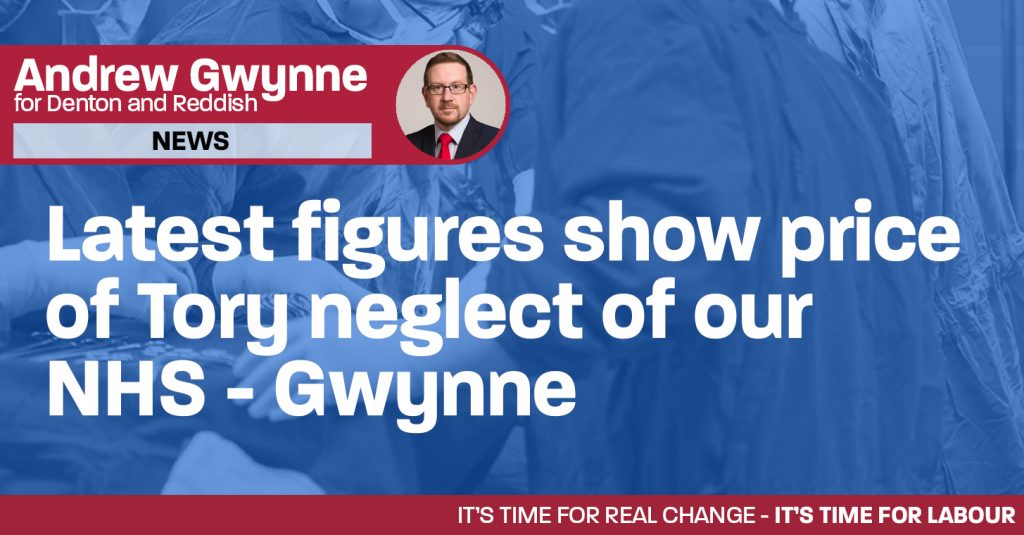 Andrew Gwynne, Labour’s candidate for Denton and Reddish, has expressed his deep concerns about the Conservatives’ management of the National Health Service, following the release of the latest NHS official statistics.

The statistics released today by the NHS cover England and show key targets being missed on a number of different fronts, including record underperformance.

The figures show that more patients than ever – 4.42 million – are on hospital waiting lists.

Meanwhile, A&E (Accident & Emergency) delays are at the worst level since records began. Only 83.6% of A&E patients were admitted or transferred in four hours, a long way from the target of 95%.

Targets for the time taken for cancer patients to start their treatment and the amount of time patients are on waiting lists have also been missed.

These figures come a day after Labour announced a set of policies aimed at addressing the crisis facing the NHS, including billions of pounds in extra investment over the next parliament.

“These figures are shocking but unfortunately not all that surprising.

“For almost a decade, the Tories have neglected our NHS and these latest figures show what this neglect means for our health service and the millions of people who rely on it.

“Labour created the NHS and the upcoming General Election will give people the opportunity to elect a Labour Government that will always give the NHS the money and support it needs after nine years of Tory neglect.”

“The Conservatives have ushered in the worst NHS crisis on record. Under Boris Johnson the NHS is in crisis and we’re heading for a winter of abject misery for patients.

“Our A&Es are overwhelmed, more so than ever. In every community there’s an ever growing queue of people waiting for treatment. The Tories spent a decade cutting over 15,000 beds. Now they should apologise to every patient languishing on a trolley and waiting longer for treatment.