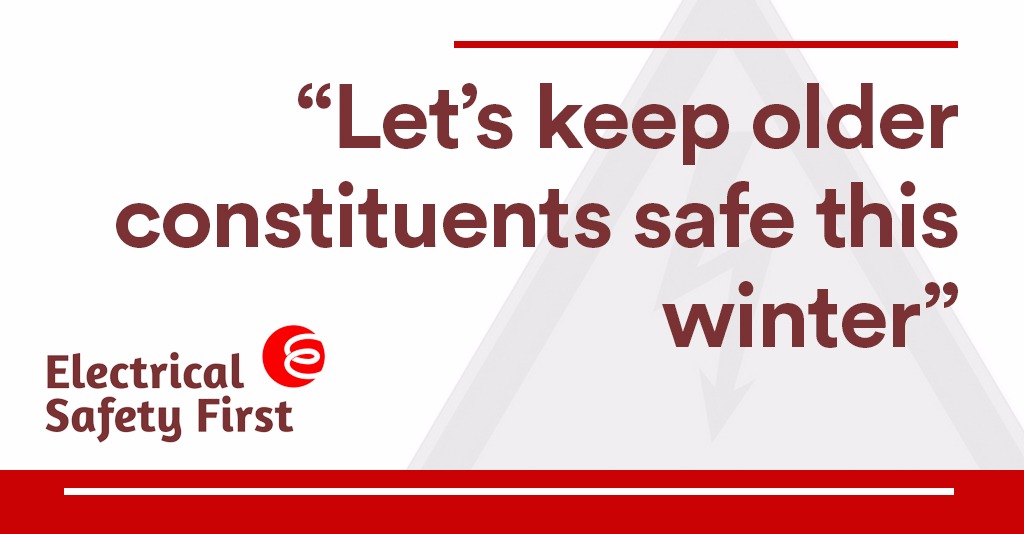 Denton and Reddish MP, Andrew Gwynne, has attended a Parliamentary event to offer his backing to Electrical Safety First’s, Safer Over 65 campaign.

Winter is coming and with over half of all domestic fires arising from electricity – and older people disproportionately affected by them – it’s the time of year we particularly need to keep an eye on older friends and relatives.

That’s why Gwynne is backing Electrical Safety First’s Safer Over 65 campaign. The Charity is working with MPs to encourage constituents to check on the electrical safety of older family members, or neighbours, and has developed a range of tools and guides to help keep them safe in their home.

Most electrical fires are caused by simple mistakes that can easily be avoided. The Charity’s top tips for using portable heaters safely are given below but for more detailed help – including an app which allows you to do a rapid visual electrical safety check of a home, plus a range of safety guides – visit: http://www.electricalsafetyfirst.org.uk/olderpeople

“Many older people worry about winter heating bills, often using portable heaters and electric blankets to cut costs – but these appliances have caused a number of house fires, mainly through misuse.

“And with most older people being owner-occupiers, they tend to live in homes which haven’t had an electrical safety check for many years which often lack important electrical safety features. Today, we are sadly also seeing a significant increase in age-related illnesses such as dementia, making electrical safety even more of an imperative.”