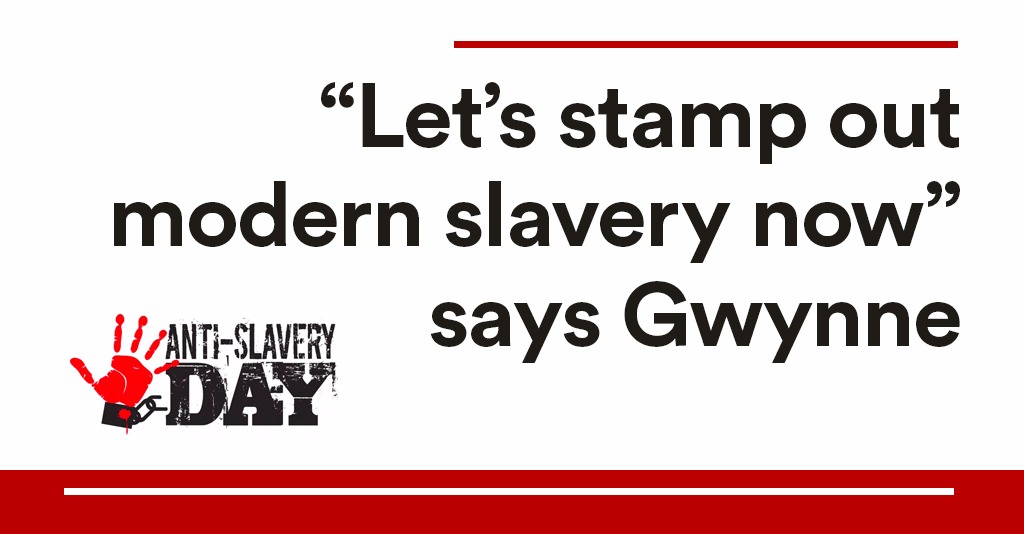 Denton and Reddish MP, Andrew Gwynne, has joined worldwide charities in arguing for more to be done to stamp out all forms of modern slavery in the UK as the world begins to mark World Anti Slavery Day 2018.

The term ‘modern slavery’ encompasses broad areas including human trafficking, labour exploitation, and people who are bonded, or indentured. The UK Government estimates there are around 13,000 people in modern slavery in Britain today. In 2015, over 3,000 people, including nearly 1,000 children, were referred to British authorities as potential victims of slavery. There were 2,118 suspected child trafficking victims reported to the UK authorities in 2017, a 66% increase from the year before. British children make up the biggest group of suspected victims, with 677 children from the UK referred to the authorities – a massive 265% spike.

In spring 2017, the BRE catalysed a coalition that developed the Modern Slavery & the UK Construction Sector Industry Charter, which raises awareness to help eradicate modern slavery in supply chains. Signatories to the charter commit to seek opportunities to uphold, preserve and promote the right of freedom in the UK’s construction industry. In addition, the GLAA Construction Protocol was signed on 11 October 2017. The protocol provides a framework for the GLAA and the construction sector to enter a dialogue on labour exploitation.

The Human Trafficking Foundation hosts Anti-Slavery Day Awards to recognise journalists, filmmakers and broadcasters who have exposed issues of modern slavery, and to celebrate organisations and individuals who have made an outstanding contribution to the fight against modern slavery. Find out more by visiting humantraffickingfoundation.org

“Slavery in Britain affects thousands of children, and too often we fail to protect them. Modern slavery is a blight, both in the UK and the world more widely, and we all must do more to stamp the practise out.

“I want to join the charities, individuals, local authorities and police forces who take action to mark Anti-Slavery Day.”