Like in the 1950s, we need to tackle air pollution – My Column for the Tameside Reporter 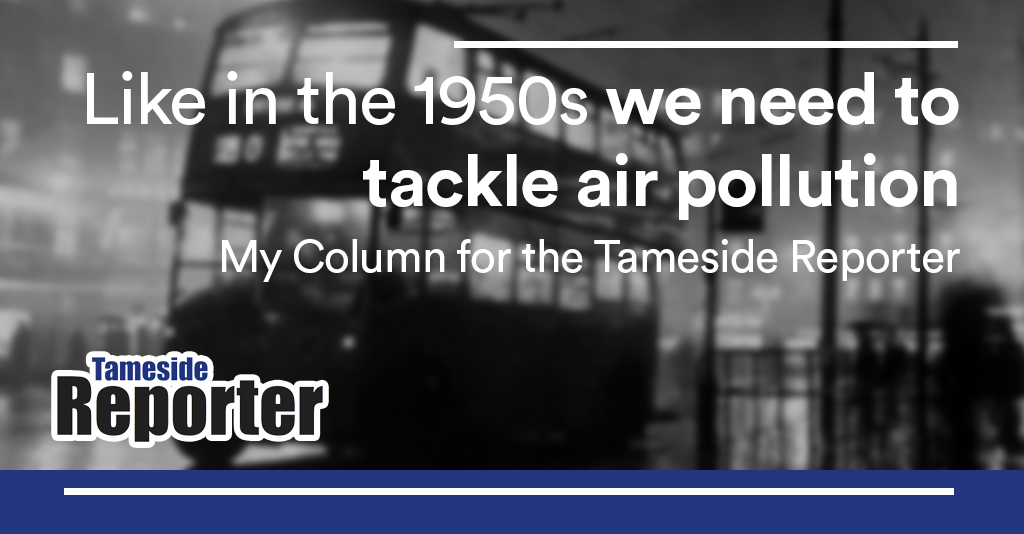 22 years ago, as a newly-elected Tameside Councillor, I was invited to meet the Council’s Directors. It was an opportunity for them to explain to us newbies how their departments worked, what they did, and how to contact them with our own issues and concerns.

One of the people I met was a man called Geoff Kaufman. He was the Director of Environmental Services at the time and I remember him telling me with pride that he had worked his way up through a variety of Environmental Health roles from a junior trainee at Denton Urban District Council right through to becoming Director of a huge department at Tameside Council.

Now why am I telling you this? Because he was very keen to tell me – as a Dentonian – that the former Denton UDC was one of the very first councils outside of London to adopt the Clean Air Act 1956, and part of his role, back in the day, had been to implement enforceable smokeless zones across Denton.

That Act had done so much to improve the public health of the population. It’s very easy to forget that back then the air pollution was very visible. The mills and factories all had chimneys spewing out thick black smoke. Most homes had coal fires. The air was grimy, our buildings soot black, and occasionally we had thick pea-souper smogs. You knew the air you were breathing was bad for you.

Street tree planting helped to suck pollutants out of the atmosphere. The smokeless zones meant wood and coal couldn’t be burnt (unless it was special smokeless fuel), and the polluted river valleys started to be converted from industrial wasteland back to nature.

The British Government has been fined by the EU for allowing unsafe air quality; but the government – crafty as ever – have decided to pass these fines down to local councils. That’s why Greater Manchester’s ten councils are consulting on a Low Emission Zone – fining the most polluting vehicles, to encourage a switch to cleaner modes of travel. This is very different to a congestion charge, because not all vehicles will be included in a zone. Almost certainly commercial vehicles and HGVs will be included.

But much more can, and should be done. We need to join-up planning policies with the clean air plan. That’s why I’m so against the extension of Bredbury Parkway Industrial Estate deep into the Tame Valley. Not only will the loss of a precious greenbelt buffer between Tameside and Stockport be an act of environmental vandalism in itself, so too will be the diversion of even more heavily polluting HGV traffic through Denton’s roads as a consequence.

We need to join up our transport policies too. It would be laughable, if it wasn’t so serious, that we have perfectly good railway infrastructure just at the intersection of the M60 and M67 at Denton interchange; perfect for park and ride with a dedicated rail service into Manchester BUT in reality with just one passenger train a week between Stockport and Stalybridge serving the line.

And then there’s the simple things the Council can do: plant many more trees. Lots of the street trees planted in the 1950s have been felled and never replaced. But they really do help to clean our air!

Fundamentally though we need to see more national leadership on this scandalous public health crisis. We need a new Clean Air Act fit for the 21st century, because why should the life chances of ordinary Tamesiders be cut short because of this invisible killer that we can and should be doing something to fix?