MINISTER MUST COME CLEAN about involvement in decision to hire Maes

A trail of emails reveal that Miriam Maes emailed the Climate Change Minister Greg Barker MP directly on at least seven occasions, requesting his personal intervention to secure her contract extension with the Department for Energy and Climate Change and the possibility of her taking on other roles in the Department. In reply, Barker promises to “give it a very big nudge” and “bang the desk about this today”.

“David Cameron told the House of Commons that Miriam Maes was hired by civil servants after a proper competition, but this trail of emails suggests that Greg Barker personally intervened to secure Miriam Maes’ job.

“There can be no cover-ups. Greg Barker must now come clean about exactly what involvement he had with the decision to hire Miriam Maes.”

At Prime Minister’s Questions, David Cameron was asked about Greg Barker’s links with Miriam Maes by Andrew Gwynne, MP for Denton and Reddish, who said: 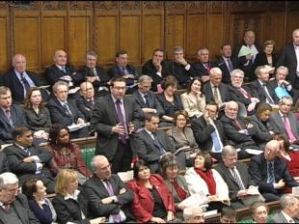 “The Adam Werritty affair should have taught Ministers important lessons about becoming too close to their outside advisers. Now it appears that the Prime Minister’s climate change Minister, the hon. Member for Bexhill and Battle (Gregory Barker), may be making similar mistakes. Given media reports today, does the Prime Minister have the same complete confidence in his climate change Minister as he had in his former Defence Secretary?”

“The climate change Minister is doing an excellent job; I want to put that on the record. I have consulted with the Cabinet Secretary, and both he and the permanent secretary at the Department of Energy and Climate Change have examined the issue, and I do not see the need for a further inquiry on that basis. The key point I would make is that the individual in question was hired by civil servants after a properly run competition.”

The emails also reveal that ministerial approval would have been required to agree Miriam Maes’ contract. Caroline Flint MP, Labour’s Shadow Energy and Climate Change Secretary, has today tabled a series of parliamentary questions to find out (a) if the position of Delivery Adviser on Energy Efficiency to the Department of Energy and Climate Change was advertised; (b) if so, how many people applied for the job and were interviewed; (c) whether Greg Barker MP or any other ministers had any involvement in the decision to hire Miriam Maes or to renew her contract.