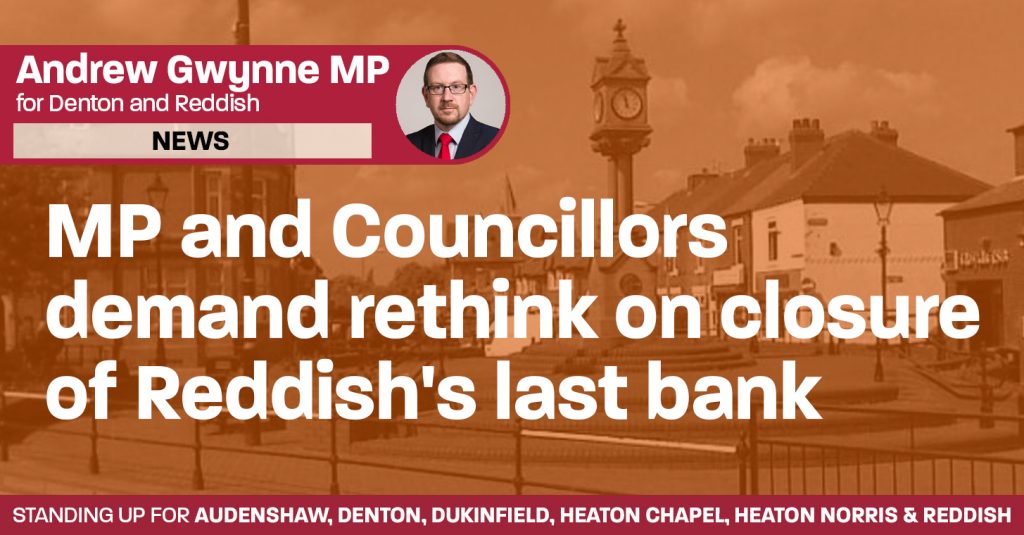 Andrew Gwynne, MP for Denton and Reddish, has joined with local councillors to urge Lloyds to reconsider the proposed closure of their Reddish branch – the last bank in the town.

The Lloyds Reddish branch in Houldsworth Square is due to close on 26 May 2020 and customers will be written to shortly.

This closure follows the closures of Natwest and Barclays branches in Reddish in 2015 and 2016 respectively, leaving Reddish without a bank.

Gwynne will also write to the Chief Executive of Lloyds Bank and the Business Secretary to object to this move.

“This is incredibly disappointing news for Reddish. The town is now left without a bank and that will hit many of the most socially excluded hardest, as well as causing major issues for many of our small businesses.

“This move puts profit before people and I would strongly urge Lloyds to reconsider this damaging decision.

“Both residents and businesses in Reddish need a bank and I will be making this point very clear to the Government.”

“The Lloyds closure marks the end of banking services in Reddish which will be a blow to business and individual account holders alike.

“I would like some assurance from Lloyds that once they have vacated the building they will do all they can to ensure it does not fall into disrepair and become an unwelcome eyesore on Houldsworth Square”.

“This is very disappointing and represents a very poor offer to Reddish from the banking community.

“It is a huge blow for older people in particular, who are used to going into the bank to access services and who may not have access to – or trust in – online banking.”