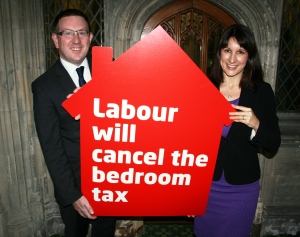 Andrew Gwynne MP this week voted to abolish the unjust and unworkable Bedroom Tax being imposed by the Tory-led government, saying that the people affected by this tax simply can’t wait until 2015 for this to be repealed.

The Bedroom Tax hits over 400,000 disabled people nationwide, and around 1,292 people in the Denton and Reddish constituency alone. For the vast majority of those affected, there is nowhere smaller to move to, hitting vulnerable people with an average bill of £720 a year through no fault of their own. Instead of reducing the housing benefit bill, there is now a real risk the Bedroom Tax will cost more than it saves.

“The Bedroom Tax is leaving families up and down this country with nowhere to go and on the edge of spiralling debt. These people simply can’t wait until the next Labour government in 2015 for it to be repealed. They need it repealed now.

“That is why I voted with our Shadow Work & Pensions Secretary, Rachel Reeves and other colleagues this week to do just that.

“The Labour Party promised to repeal the tax in government, and because we know that in these tough financial times we can’t borrow more to pay for social security, we’ve set out a clear plan to pay for the repeals by cutting down on tax loop holes and avoidance.

“The people of Tameside and Stockport can see what this Tory-led government’s policy is doing; and it’s doing it to the wrong group of people. At the same time as cutting taxes for the wealthiest, they are penalising disabled people and their loved ones that work so hard caring for them.

“The Labour Party’s policy to repeal this tax isn’t only fair but makes sense. The Tory-led government should follow our lead.”

The next Labour Government will repeal the Bedroom Tax without extra borrowing. To cover the £470m cost of repealing the Bedroom Tax, funds have been earmarked from: