Our planet is in crisis, we need drastic action on climate change – my weekly article in the Tameside Reporter 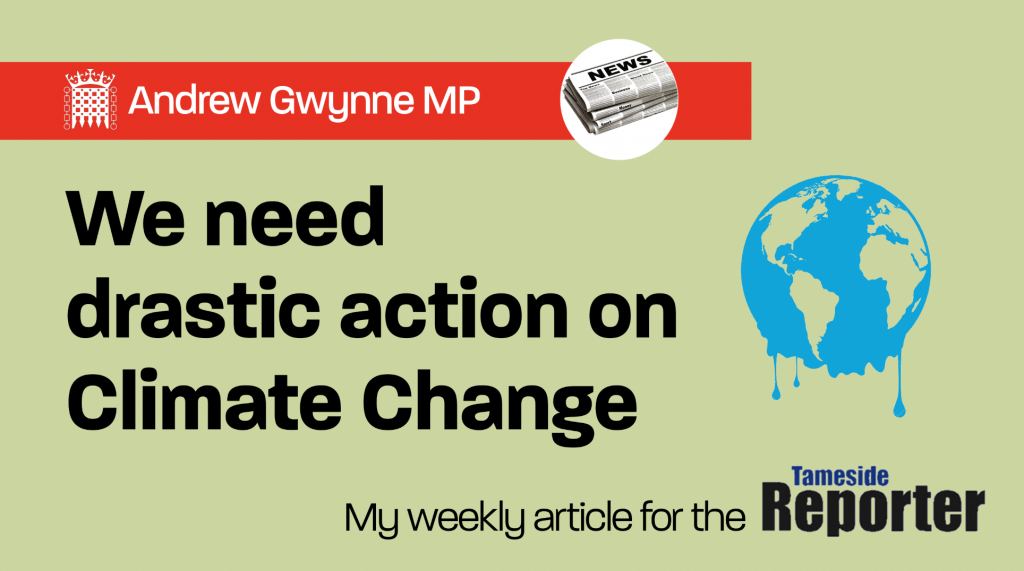 Let’s talk about climate change. Now I know we seem to be stuck in a rather typically-British rainy June right now, but unless you subscribe to the President Trump theory that climate change is bogus, all the real evidence shows that the Earth is warming up, ice caps are melting, sea levels are rising and the numbers of species on the planet are plummeting. And while it may be a considerable time off, it all potentially points to our own extinction too.

And yet we hold many of the answers in our own hands.  We largely caused the current crisis and it’s not too late – just – for us to try and fix it.  That’s why I was proud that the Labour Party’s recent motion to Parliament, declaring a ‘Climate Emergency’, was adopted by cross-party consensus.

You see, Britain, as a UN Security Council member,  has real potential to lead global efforts to save our natural world. At present, our polluted air is killing us, our farms face an uncertain future, our fish stocks are collapsing, our oceans are used as dumping grounds, and our Areas of Outstanding Natural Beauty are under threat.

We know our planet is in crisis, and it is high time for decisive action. The inspirational 16-year-old activist Greta Thunberg told politicians when she visited Westminster in May that “one person can make a huge difference”, and this is true.  We can start here in Tameside with small steps… Be it declaring a clean air zone around Russell Scott Primary School in Denton, or helping to clean up our Tame Valley as many dedicated volunteers from across the borough now do; every little step helps.

But we also need concerted national action: A new environment bill is long overdue, and it must fundamentally challenge the production and energy systems we rely on.

The WWF – World Wide Fund for Nature’s ‘Living Planet’ report highlighted that agriculture has caused a 60 per cent loss in wildlife populations since the 1970s. The evidence is clear that intensive farming threatens our natural world and our supply of food, water and clean air for future generations. This is just one area that a new environment bill could confront.

Given the range of challenges at hand, I am delighted that Labour is leading the demands for drastic action. We successfully called on MPs to declare a national environmental and climate change emergency. But that is just the beginning.

We now need the Government to act, with the introduction of binding targets to roll out renewable energy and low-carbon transport, to increase proper funding of environmental protection and to develop plans to move towards a zero-waste economy.

There have been a number of Conservative MPs who have spoken out against plastic waste and environmental disaster but too many of them remain in denial or opposed to the scale of change needed this problem is going to get away from us all.

As Greta Thunberg said in her address, “we cannot solve an emergency without treating it like an emergency”. Following years of devastating flooding, forest fires, and ecological decline, we must all work together to deliver a sustainable future for the future generations.  It’s in our hands.  So come on Tameside, let’s rise to the challenge – think globally and act locally.