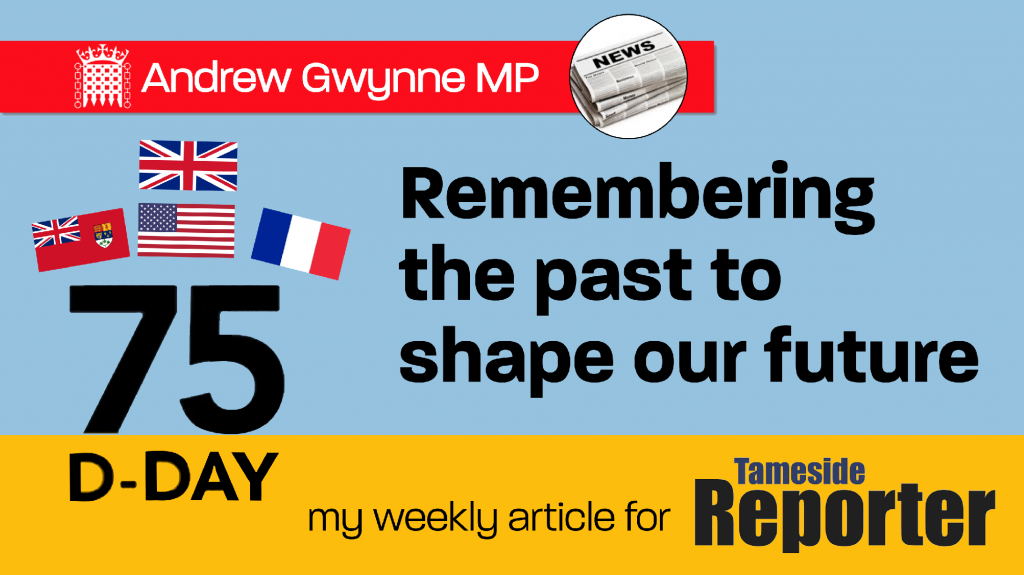 This week marks the 75th anniversary of the D-Day Normandy Landings, on 6 June 1944. It was a major turning point in the Second World War leading to the eventual defeat of Hitler and the Nazis.

You see, it was the global economic collapse in the late 1920s which led to the rise of fascism and extremism across Europe: Franco in Spain, Mussolini in Italy, Hitler in Germany. It took brave men and women to stand up to these warped ideologies. Millions of innocent citizens were exterminated – killed for their religious or political beliefs. Many millions more lived in terror and fear.

Those brave people, from resistance fighters in Europe through to the brave personnel of the Allied Forces should be remembered at this time, as should all the victims of the conflict. But that generation isn’t just owed a debt for their sacrifices, they also are the generation who built the peace.

Here in Britain, there was a real determination that, unlike after the First World War, we would not see a return to ‘business as usual’, to the extent that Winston Churchill was packed out of Downing Street to make way for his wartime Deputy, Major Clement Attlee. That 1945 Labour Government rebuilt our country: from the creation of the NHS through to the establishment of the Welfare State. Never again would Britain be as socially divided as it had been before the war.

Roll on three quarters of a century. Our country – and much of Europe and the wider world – is still reeling from the economic fallout from the 2007 global financial crash. As in the 1930s, extremes in politics are sadly becoming fashionable, along with scapegoating others for the world’s ills. And this is where we should use these commemorations as a jolting reminder of what happens if we fail to learn the lessons from history.

So as we look back on the huge efforts of 1944 with pride and thanks, let’s also harness the passion and desire of 1945.

Let’s demand a better, fairer, more equal and just world in 2019. Britain today does not have to be like it is, a country of food banks and shrinking life expectancy; or of poor housing and bad public services. Rather than scapegoating others for these problems, remind ourselves that these are the result of political choices… made here in Britain. Let’s have a renewed vision of pride in what our country can become, like those postwar heroes who, having won the war, fought equally as hard to build – and win – the peace.