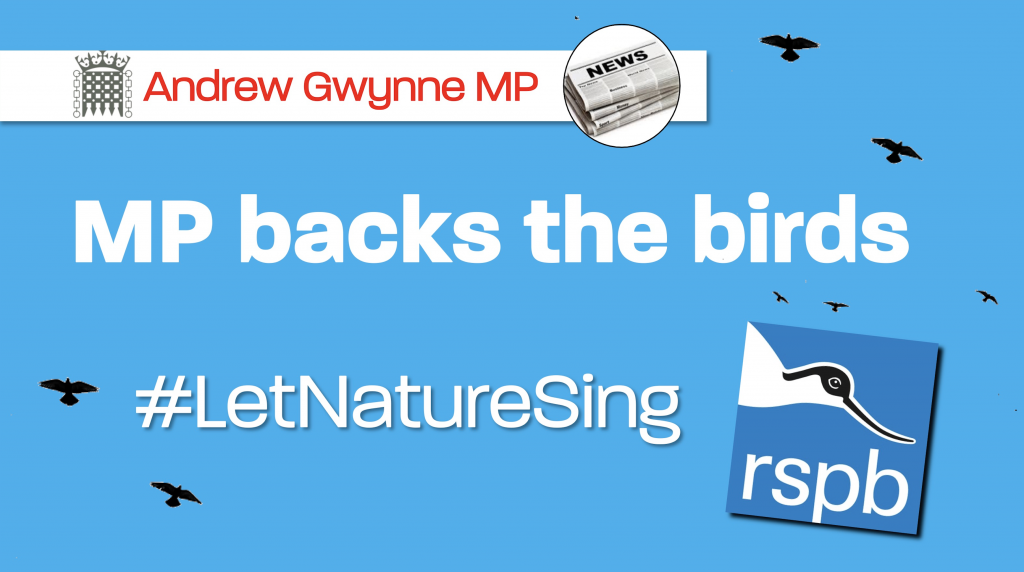 Andrew Gwynne MP is backing the Let Nature Sing campaign from the RSPB,  that aims to encourage more people to discover the healing power of birdsong and learn what we can do to reverse natures decline.

The sounds of Britain’s most endangered feature on a new single released by the Royal Society for the Protection of Birds (RSPB). The track is primarily designed to raise awareness, but any proceeds raised from the sale of ‘Let the World Sing’ will be used to support the RSPB’s 200 nature reserves around the UK. These sanctuaries provide homes for birds, protecting them for future generations to enjoy.

The charity reports that the UK has lost more than 40,000,000 birds since 1966, largely due to the destruction of habitats, pollution and climate change wreaking havoc with natural environments. Statistics individual to each species of bird are even more startling: in the last 50 years, the number of nightingales has fallen by 50 per cent; more than half of all skylarks have disappeared; and turtle-doves are down 98 per cent. The swift and the curlew are now critically endangered.

The ‘singers’ were recorded by the RSPB’s Adrian Thomas, who tracked down their sounds across the UK from 2016 to 2019. Directed by Sam Lee, award-winning singer and musician, and produced by Bill Barclay, musical Director at the Globe Theatre; the single uses entirely new sound recordings from RSPB nature reserves around the UK.

“It was great to hear the Let Nature Sing single and learn what we can do to reverse natures decline.

“Since 1966, the UK has lost more than 40 million birds. Time is running out to save the rest but together we can make a difference by helping to get this single of birdsong into the charts. Spread the word – don’t let nature’s music stop”

For more information and to buy the single, go to: https://www.rspb.org.uk/get-involved/campaigning/let-nature-sing/