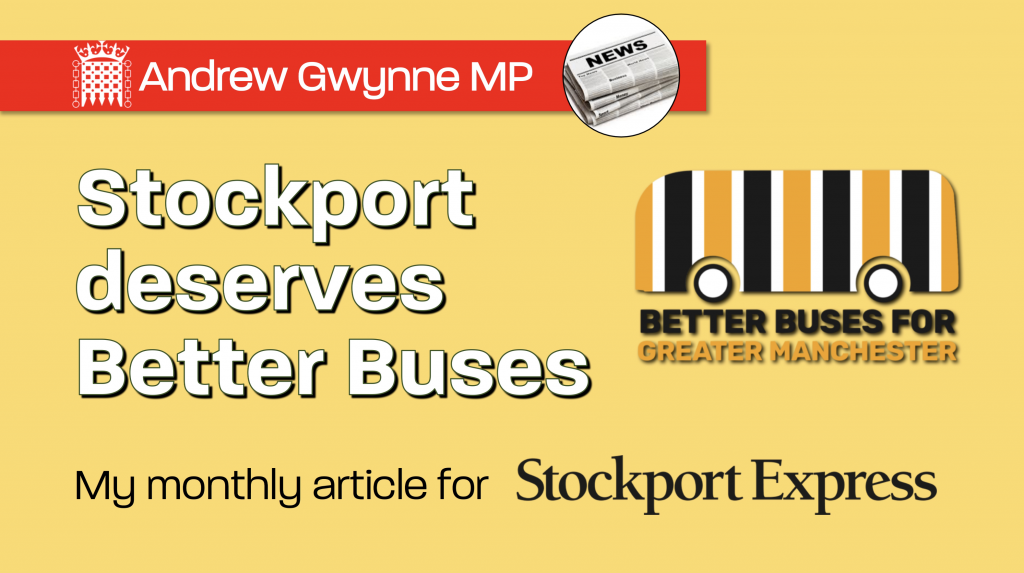 Bus deregulation has been a 33-year-long experiment of the free market and it’s failed us.

Now that might seem a sweeping statement for a town served by one of the best bus services in the country (the 192) but the reality for most Stopfordians is infrequent and expensive services, if they’ve not been withdrawn from service as bus operators dictate the terms of service and often demand an ever greater taxpayer subsidy for the privilege.

Now I’m not saying that everything pre-1986 was rosy, but the simple facts remain. Back in the days of Greater Manchester Transport,  our bus network was larger and was proportionately cheaper (both for passengers and taxpayers) as the commercially viable services, the ones that made a profit, cross-subsidised the myriad of services that could never be financially viable but which were a lifeline for those communities they served.

These are the principles we have to return to. That’s why I’m backing the Better Buses for Greater Manchester campaign. You see, the Mayor of Greater Manchester now has new powers if he chooses to use them. They’re the same powers to control the bus network that London (where bus deregulation never happened) by franchising out chunks of a properly planned network.

It means that bus services can be restored to the outlying areas and the housing estates; that they can be properly integrated with train and tram services, rather than competing with them; and it means we can start to develop a proper public transport network again.

So come on Andy. Let’s fix our broken bus network. Then I can start on my next hobbyhorse… getting the tram to Stockport!