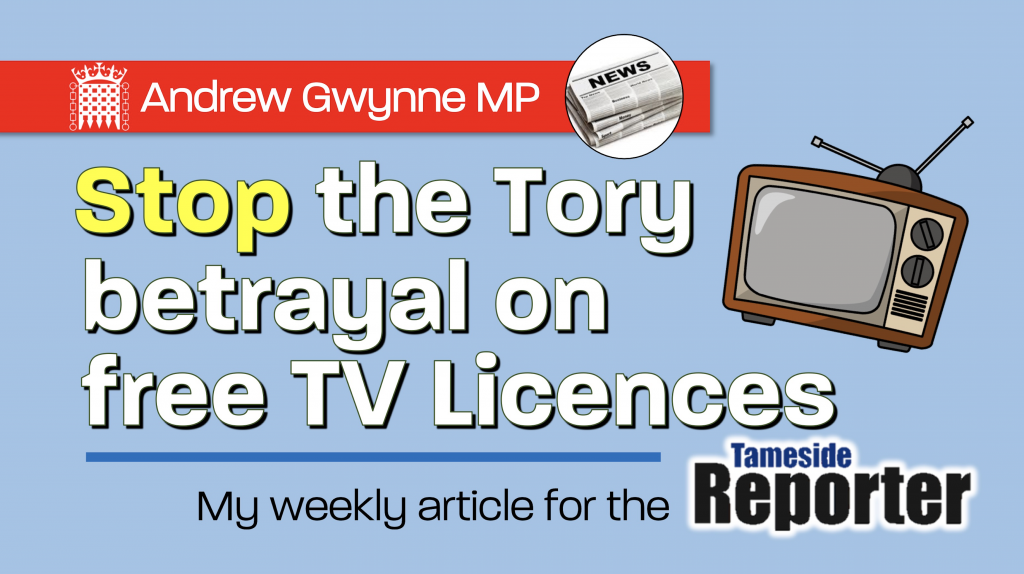 Last week in Parliament the Labour Party used one of our (currently infrequent) Opposition Day Debates to raise the important issue of free pensioner TV licenses being under threat.

That’s because, new research shows that millions of older people across the country could lose their TV licence as soon as next year despite the Conservatives’ 2017 Manifesto promise to protect free TV licences for the duration of this current Parliament.

Here in the Denton and Reddish constituency (which included Audenshaw and Dukinfield too) 6,327 older households could face having to pay the licence fee where they currently don’t, costing a total of £977,521 annually.

So why is this happening? Well it’s typical smoke and mirrors from the Tories. As part of the last BBC Charter renewal, the Government removed their own responsibility for providing the free TV licence, a pensioner benefit that had been introduced by the last Labour Government, and they shifted the cost directly on to the BBC itself.

But now the BBC is consulting on various options available to them including scrapping the free TV licence concession altogether, or raising the eligible age to 80 or means-testing it. None of these options is acceptable and introducing any of them would be a complete betrayal of the Tories’ General Election manifesto pledge not to remove any pensioner benefits.

If the plans go ahead, thousands of local people over 75 will lose out and yet we all know that the free TV licence is an important provision for many older people who suffer disproportionately from loneliness and social isolation. Indeed, the ‘Campaign to End Loneliness’ found that 40% of older people said their TV was their main source of company.

That’s why it’s so right to hold the Government’s feet to the coals on this issue. And it’s why Labour will always fight to protect the various pensioner benefits that we introduced in Government, from the bus pass to free prescriptions, and the Winter Fuel Allowance to the free TV licence. Because once one is attacked, it opens the door to them all being whittled away. Let’s hope, on this, common sense prevails.