Denton, Audenshaw and Dukinfield MP,  Andrew Gwynne, has today handed in a petition signed by thousands of Tamesiders to the Prime Minister’s office at Number 10 Downing Street, calling for the National Remembrance Armistice Day to be made a public holiday.

The petition was organised by Tameside Council.

The petition outlines that Britain does not have its own National Day, and that Tameside Council believes that a way to celebrate the nation is to have a National Remembrance Holiday falling on the Monday after Remembrance Sunday each year.

The petition states that such a holiday will:

“…serve to emphasise the commemoration of the fallen who gave their love for their country.  The petition therefore calls on the Prime Minister to make the Monday following Remembrance Sunday a national bank holiday for England”.

“I congratulate Tameside Council – and particularly Cllr Kieran Quinn, Susan Quinn and Jackie Lane – who organised  this incredibly popular petition which has literally been signed by thousands of people from all across the borough who’ve visited local libraries, town halls and community centres. I fully support their call to have Armistice Day as a Bank Holiday to show respect for today’s armed forces and to remember the sacrifices of those that have fallen in conflicts past.”

“I saw that strength of feeling over the weekend when hundreds of people came out to show their respect at local Remembrance Sunday services, including in both Denton and Dukinfield where I paid my own respect to the fallen.” 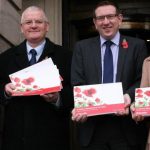 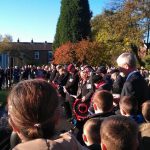 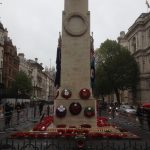 Wreaths on display at the national Cenotaph in Whitehall 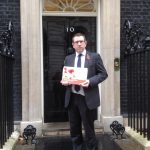