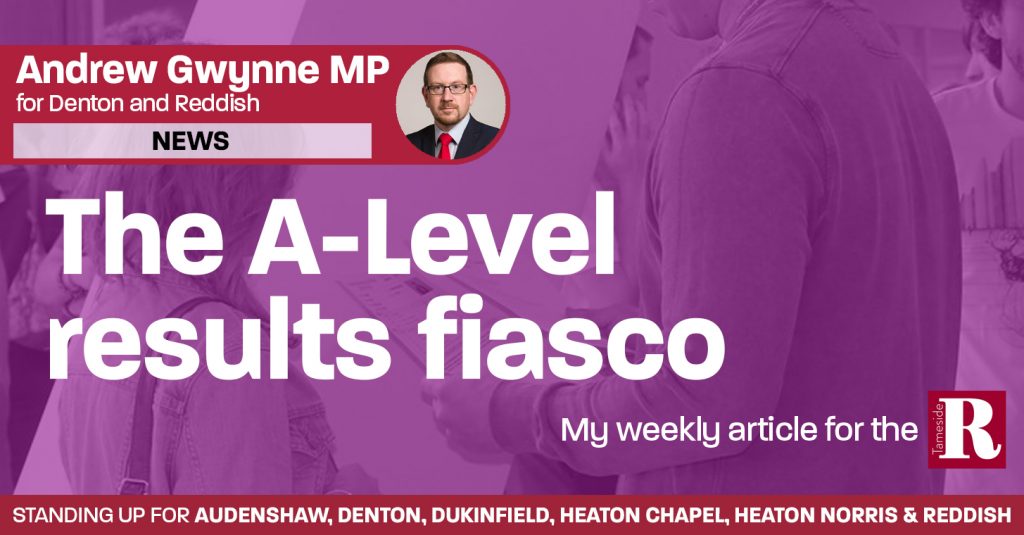 Imagine if you’d been told that you’d failed an exam that you hadn’t even taken, based on an algorithm that pushed down grades based on whether your school was in a poor area or a rich area. This sounds like something out of a dystopian novel, but unfortunately, thanks to the gross incompetence of our current Tory Government, that was the situation facing young people across the country until their massive u-turn on Monday.

I fully accept that awarding grades when no exams have been taken was never going to be an easy task, but the way that the Government handled the issue has been absolutely disastrous. The algorithm itself was clearly deeply flawed, with a bias towards independent schools and against sixth form colleges and schools in less affluent areas, but the Government made it worse and worse with their shambolic attempts to deal with the appeals process.

What’s more, the Government had plenty of warning of the impending disaster. Not only did they fail to realise their error for around 5 months (when they cancelled exams) but when something similar happened in Scotland, the Tories were gleefully slamming the Scottish Government, seemingly oblivious to the fact that they had messed up in almost exactly the same way!

In amongst all this chaos, we heard terrible stories of students missing out on their university places based purely on where they go to school or college; a whole generation failed by this Conservative Government.

And as students and their families tried desperately to piece things together, one man was -and remains – conspicuously absent. During a major crisis, the Prime Minister appears to be in hiding. The Government’s shocking failure on exams isn’t just down to the hapless and incompetent Education Secretary Gavin Williamson – Boris Johnson said when he became Prime Minister that when it came to education he would take “personal responsibility”. Rumours are that he’s off on yet another holiday…

In u-turning, the Government have now rectified some of the mistakes that they have made in awarding A-Levels. Unfortunately, the delay has caused absolute chaos and universities will now be left to pick up the pieces, as many offers were already taken up and accommodation allocated. The Government needs to support universities through this fresh crisis and not wash their hands of it.

Similarly, this year’s GCSEs will now be based on teacher assessments and again the Government will need to work closely with colleges and schools to work through how to deal with an unusual set of results.